The area's healthy economy and broad-based job and population growth are fostering demand for rentals and attracting developers and investors. This list highlights the metro’s top private, REIT and institutional owners, based on unit counts, according to Yardi Matrix data.

Atlanta is currently one of the fastest growing cities in the United States. The healthy economy and broad-based job and population growth are fostering demand for rentals, attracting developers and investors to the market. Towards the end of the second quarter, roughly 68,000 multifamily units were in different stages of development, of which 20,400 are already under construction.

Consistent growth and greater returns drive the competitive multifamily investment scene, as The Gate City is ideal for those in search of a large regional center outside the overheated core coastal markets. This list highlights the metro’s top 10 private, REIT and institutional investor apartment owners, based on unit counts, according to Yardi Matrix data. The total number includes units within projects that are completed, under construction, planned as well as prospective. 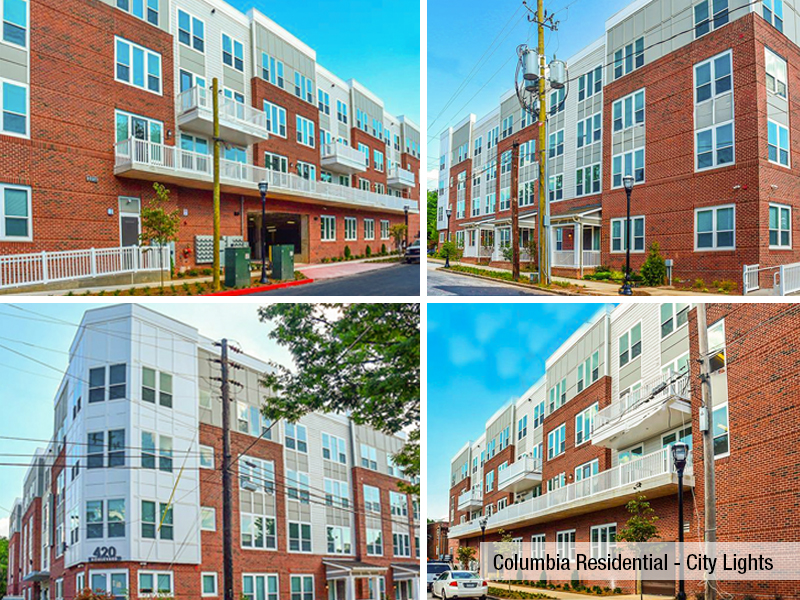 Although having the least amount of Atlanta multifamily units on this list (4,460), Columbia Residential has the most properties. Out of its 34 assets, 31 are in Urban Atlanta and three are on the outskirts of the city. The firm’s largest community is the 224-unit Spoke, which is currently under construction. Columbia’s newest completed development is the fully affordable City Lights, located at 430 Blvd. NE, managed by Wingate Management Co. The 80-unit property opened its doors in August 2016 and a second phase is already planned. City Lights features one-bedroom apartments averaging 684 square feet, a fitness and business center, community room and covered parking.

Coming up on the list are Camden Property REIT and private owner Walton Communities, with 4,871 Atlanta units each.

The Houston-based trust owns and manages 15 communities, most of which located within the city core. Out of the total units, 4,497 are luxury, the most expensive property being the 379-unit Camden Paces situated in the Haynes Manor/Peachtree Hills submarket, at 77 E. Andrews Drive NW. The community consists of one- to three-bedroom residences with an average rent of $2,676 per month. Founded in 1982, the REIT owns 161 properties and 56,774 units nationwide.

The local private owner’s portfolio consists of 19 multifamily communities scattered across the suburbs, with only a few in core areas. Out of its 4,497 metro Atlanta units, 1,983 are luxury, 1,248 fully affordable and the remaining market rate. Located in the Canton/Woodstock submarket in Suburban Atlanta, the luxury 308-unit Woodstock West property is the largest, featuring lofts, studios and one- and two-bedroom options. Walton manages all of its assets, including the ones the firm owns in Augusta, Ga.

Founded in 1991, the private investment firm has the largest national property and unit count in this list: 321 communities; 100,046 units. Its Atlanta portfolio encompasses 5,126 units, 80 percent of which are luxury. The assets are managed by either Milestone Management or Bell Partners. Landmark at Bella Vista, the largest property, is located in the Duluth/Norcross submarket of Suburban Atlanta and was part of a 63-property portfolio sale Starwood closed in 2016. The 574-unit community boasts a fitness center, a clubhouse, swimming pool and a tennis court and was 92.2 percent occupied as of May 2017.

Integral Group owns 5,158 multifamily units in the metro, all of which located in core areas of the city. Out of its 19 assets, the Atlanta-based company manages 12, The Villages of East Lake being run by Columbia Residential. The remaining six are in different stages of development. The largest property is the 667-unit Villages at Carver and the most expensive is Centennial Place, with average monthly rent resting at $1,691. Centennial Place—along with seven other communities—are partially affordable and four are fully affordable. 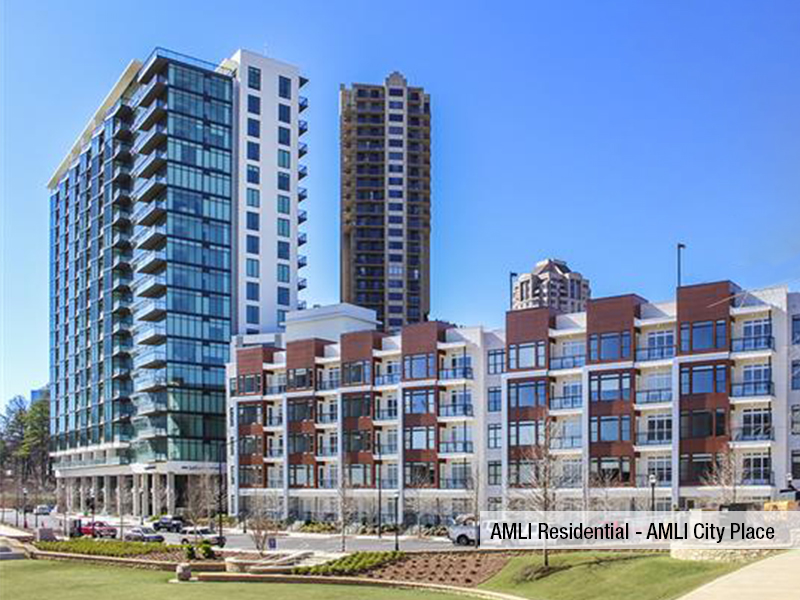 Headquartered in Chicago, AMLI Residential is an institutional investor with focuses on development, management and acquisition of multifamily communities. The only institutional investor on this list, the firm holds 5,358 Atlanta apartments under its umbrella, of which 4,778 are upscale. The LEED-certified AMLI 3464 is the most expensive asset, located in the Buckhead Village submarket of Urban Atlanta. The residential community features one-, two- and three-bedroom options as well as penthouses. Rent at a three-bedroom penthouse equates to $7,576 per month, while the average property rent is $2,663. Currently under construction, the 400-unit AMLI City Place will be the largest in the company’s Atlanta portfolio. 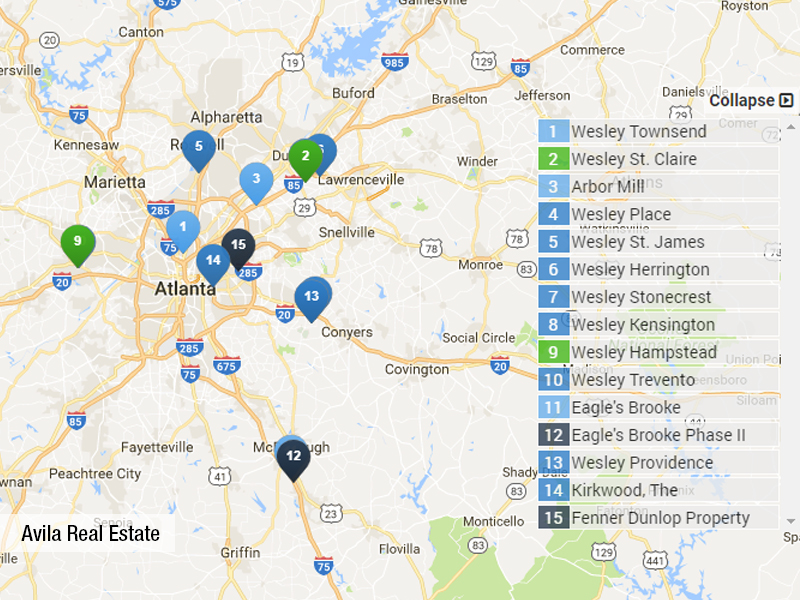 Local company Avila Real Estate’s entire multifamily portfolio is in Atlanta. The 15 properties, or 5,770 units, are located throughout both the urban and suburban areas of the city. The assets are strategically situated along major thoroughfares, including interstates 20, 75 and 85. The 679-unit Wesley Providence is the largest community, located in the Lithonia submarket of Suburban Atlanta. The 90.7 percent leased asset is managed by Wesley Apartment Homes and consists of one- to three-bedroom residences. Wesley Trevento has the least expensive rental options, as monthly rent for a studio equates to $761.

Atlanta-based RADCO lands on the third spot with 7,587 multifamily units in ATL. Roughly two-thirds of the units are luxury and its 21 properties are equally spread across both urban and suburban areas. Most of the communities have been built between the 60s and the 2000s, the newest one being the 2005-built, luxury community Crossings at McDonough. Ashford Druid Hills is the largest in the portfolio, consisting of 982 units with one-, two- and three-bedroom options. Radius at Cheshire Bridge boasts the largest rents, a three-bedroom/two-bath unit rent equating to $1,921. Since the gated community traded in December 2016, occupancy at Radius has dropped from 95.9 percent to 89 as of May 2017, mostly due to rent increases generated by property renovations. RADCO Residential manages the entire Atlanta portfolio. 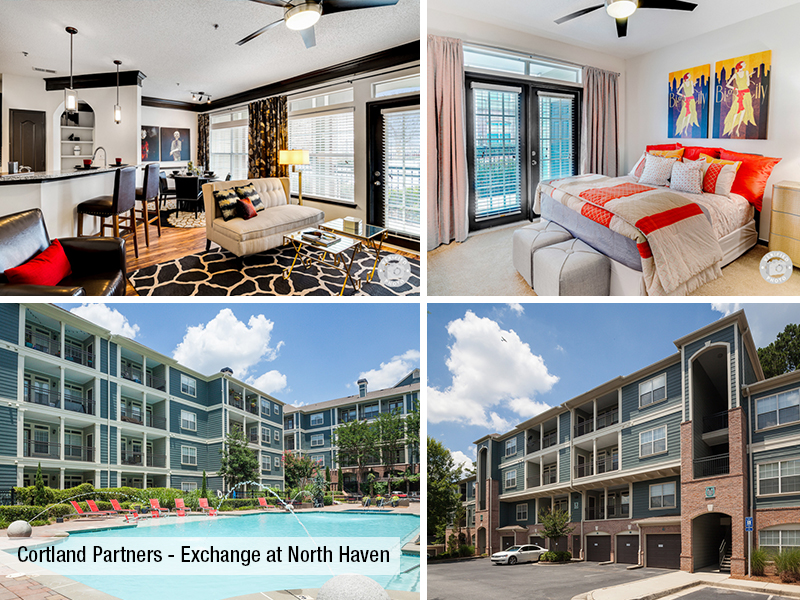 With 9,739 units in Atlanta, Cortland Partners receives the silver medal. Also headquartered in The Gate City, the company owns 23 multifamily communities with The Village at Lake Park being by far the largest in its portfolio as well as on this list. The 1738-unit community is located at 2085 Lake Park Drive SE in the North Vinings submarket of Atlanta and features studios and one- and two- bedroom residences averaging 906 square feet. The property is managed by Cortland Parterns and was 97.8 percent occupied as of May 2017. The bulk of the owner’s units are upscale (7,870) and 358 are fully affordable. Most of the low-cost units are within partially affordable communities, the firm having only 2 fully affordable assets. Towne West Manor Townhomes comprises the lowest average monthly rent—$780—and Exchange at North Haven is the most expensive property, average rent equating to $1,578 per month.

Topping the list is a Memphis, Tenn., real estate investment trust that focuses on acquisition, development and management throughout the Southeastern and Southwestern regions of the United States. Its portfolio consists of 100,042 multifamily units, with the REIT owning 11,643 in Atlanta. Most of MAA’s 31 properties are located within the city, with a few in Sandy Springs, Duluth and north of Marietta. Out of the total unit count, 98 percent are luxury apartments. Located in Buckhead, The High Rise at Post Alexander is the REIT’s newest completed development, while Post Midtown Atlanta and the partially affordable Post Centennial Park are scheduled to come online in 2017 and 2018, respectively. The High Rise at Post Alexander also boasts the highest average rents, $2,036 per month. The multifamily tower features studios and one- and two-bedroom apartments, a fitness and business center, a clubhouse and swimming pool. MAA manages each of its Atlanta communities, all of which are more than 90 percent leased.