Waltham, Mass.—PCCP LLC has provided a $98 million loan to finance Northland Investment Corp.’s 269-unit, Class A development nine mile west of Boston in Waltham, Mass. The new community, which is located at the intersection of Moody and Main streets, will also include 27,596 square feet of ground floor retail space. The multifamily component is comprised of three, five-story buildings with 242 market rate units and 27 affordable units, as well as 392 below and at-grade parking spaces.

With demo work currently underway, the final completion is slated for mid-2016, though the first apartments will be available for occupancy in the summer of 2015. The property is located within minutes of the I-95/Route 128 office corridor and is a block walk from the Waltham MBTA commuter rail station and bus stop.

“This is a very exciting development for us and for the City of Waltham. Moody & Main is a true transit-oriented development that will create a new and vibrant neighborhood in the center of downtown,” says Steven P. Rosenthal, president and CEO of Northland.

A consideration of this transaction was the anticipated short term drop in occupancy, before a return to stabilization. As such, financing for this two-loan transaction was structured with a 70 percent LTV and a 10-year term with two years of interest only. The lender also committed to a six month rate lock to help accommodate a drop in the prepayment penalty. NorthMarq arranged financing for the borrower through its relationship with a correspondent life company. 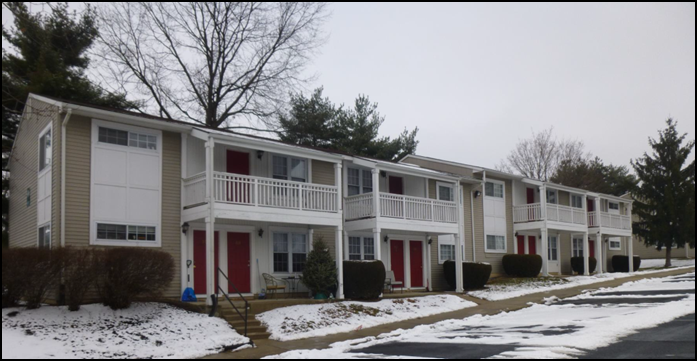 HFF worked exclusively on behalf of the borrower, LCL Management LLC, to secure the 10-year, fixed-rate loan through Sun National Bank.  Loan proceeds will be used to retire existing debt, and fund unit upgrades and other capital improvements to the community.

Village Knoll Apartments is situated on a 16.96-acre site at 100 Joya Circle, four miles west of downtown Harrisburg in Lower Paxton Township.  Owned by the borrower since 1989, the property consists of 24, two-story buildings that include a mix of one-bedroom plus den and two-bedroom units averaging 856 square feet each.  Community amenities include a dog run, tennis courts, basketball court and picnic area.  The property is 92 percent leased.

“The borrower’s goal was to obtain attractively priced 10-year money with as much prepayment flexibility as possible,” says Klein. “Sun National Bank was able to meet the borrower’s needs and executed the transaction flawlessly.”