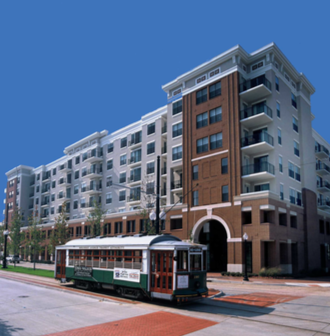 Dallas—Corporate housing leader Oakwood Worldwide has expanded its portfolio with the acquisitions of Oakwood Dallas Uptown. The 232-unit asset was purchased in a joint venture with Mapletree Group. It was the duo’s second Oakwood-branded property acquired as part of their multi-billion dollar joint venture.

“I am delighted to welcome Oakwood Dallas Uptown to the Oakwood Worldwide family; this is the perfect complement to our expanding portfolio,” says Howard Ruby, chairman, founder and chief executive officer, Oakwood Worldwide. “This is an exciting time for our company as we continue to evolve and look to fulfill our goal to extend Oakwood Worldwide’s branded and serviced apartment portfolio around the world by as many as 100 properties over the next five years.”

Originally named Bryson at City Place, Oakwood Dallas Uptown consists of both furnished and unfurnished studio and one- and two-bedroom apartments with the option of 24 different floor. Amenities include a resort-style pool, a 10,000-square-foot, full-service athletic club, and outdoor lounge areas.

Oakwood Worldwide is planning improvements to apartment and community, including upgraded stone countertops, wood flooring and new lighting fixtures, as well as barbecue grills and cabanas at the pool and outdoor living areas.

“This property is an ideal acquisition due to its great location in North Dallas adjacent to Dallas’ Central Business District and proximity to major employment hubs,” says M. Scott Orrantia, senior vice president and chief investments officer, Oakwood Worldwide. “It is located in a fantastic neighborhood one block from the Dallas Area Rapid Transit rail line station and surrounded by a wide range of shopping, dining and entertainment options, providing great access to local amenities for business travelers and their families.”

“Although its existing debt did not mature until 2018, the company wanted to capitalize on the historically low interest-rate environment to maximize cash out from the refinance,” Croxton says.  Capital One Multifamily arranged an extended rate lock period in order to lock in the low interest rate, while delaying the close of the deal to reduce the prepayment penalty.”

Charter Oaks Apartments was constructed in 1971, and Golden Horizon has owned the property since the early 1980s.  Amenities include covered parking, extra storage, pool/spa, fitness center, and community laundry. The property is located in a desirable area of Thousand Oaks within a mile of The Oaks, a major shopping center whose tenants include Macy’s, Apple, and Nordstrom.

Dallas–Institutional Property Advisors (IPA), a division of Marcus & Millichap Inc. specializing in serving institutional and major private real estate investors, is pleased to announce the sale of Hunter’s Hill, a 436-unit apartment community in North Dallas. The terms of the commercial real estate sale were not released.

Hunter’s Hill is located at the intersection of two major thoroughfares, Midway Road and Frankford Road, less than one-half mile from the Dallas North Tollway and President George Bush Turnpike. Home to more than 651,000 employees and over 30 million square feet of office space, this area along the Dallas North Tollway is known as the North Dallas “Platinum Corridor.” A Kroger Signature-anchored shopping center is located immediately across the street from the property and more than six million square feet of shopping and retail is nearby.

“Hunter’s Hill is a highly visible, prominently situated infill apartment community that presents the new owner with an opportunity to capture additional value with the completion of the remaining capital improvements,” says Balthrope.

“With limited supply in the area, the new owner can expect to capitalize on strong tenant demand in an expanding multifamily market,” adds Kile.