Capital One Multifamily provides Intercontinental Real Estate with acquisition financing; a partnership between The Dolben Company and Klein Enterprises buys a Maryland asset and begins construction on its second phase; and HFF closes the $38.9 million sale of a property in Miami.

The transaction was originated by Brian Sykes, Beech Street’s senior vice president of originations headquartered in the company’s Boston office. This is the latest of a series of transactions that the purchaser, Intercontinental Real Estate, has completed with Capital One Multifamily through its U.S. Real Estate Investment Fund. The fixed-rate loans have a seven-year term with seven years interest and 6.5 years defeasance.

“In an effort to maximize the return for the investor, we worked with Freddie Mac to provide a very competitive seven-year, full-term interest-only loan,” Sykes says.

Sykes and his team worked through several complex issues with the agency, including a master ground lease for the retail portion of the property.

Pasadena, Md.—A partnership between The Dolben Company and Klein Enterprises has acquired a 90-unit community in Pasadena, Md., known as The Reserve at Stoney Creek. The sales price was $15 million. The purchase, which was completed by Stoney Creek Phase I LLC, is the third partnership between Dolben and Klein Enterprises. The two companies’ other joint ventures include Marketplace at Fells Point and The Apartments at Charlestown Crossing.

The first phase of The Reserve at Stoney Creek was delivered in 2011 and leased up within six months. Phase II construction should between in Q3 2014, and will add 76 units, a clubhouse, swimming pool and fitness center when complete.

“We are delighted to be partnering with Klein Enterprises again, and are very excited about The Reserve at Stoney Creek,” says Deane Dolben, president of The Dolben Company Inc. “Anne Arundel County is well-known for its excellent school system and high quality of life, and with the completion of Phase II, we will be able to provide both current and new residents with all of the amenities they’ve been seeking.”

HFF closes the $38.9M sale of property in Miami 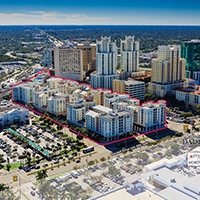 Miami—HFF announced the closing of the $38.9 million sale of Downtown Dadeland, a 127,240-square-foot retail lifestyle center in Miami.

HFF marketed the property on behalf of the seller, Downtown Dadeland Retail LLC. A joint venture between Duncan Hillsley Capital and Pebb Capital purchased the unencumbered property for $38.9 million.

Downtown Dadeland is located on 7.5 acres in the epicenter of the Dadeland “Triangle,” an urban infill location bounded by three of Miami’s most heavily trafficked thoroughfares and directly across from the Dadeland Mall. The property was completed between 2007 and 2009 and includes tenants such as West Elm, HCA Medical, Chili’s Bar & Grill, Paul Mitchell Academy, Men’s Wearhouse and Panera Bread.

“The opportunity to acquire an urban Miami retail lifestyle center with significant value enhancement potential drove incredibly strong investor interest for Downtown Dadeland,” Castillo says. “The new owner is an experienced operator and will enjoy tremendous growth in NOI and value as the property continues to stabilize.”

Duncan Hillsley Capital LLC (DHC) is a fully integrated, private commercial real estate investment company based in Boca Raton, Fla. DHC was formed in January 2009 to capitalize on the dislocation of the commercial real estate market by acquiring distressed and underperforming assets as well as assisting other investors in restructuring and recapitalizing their portfolios.

Pebb Capital is a wholly owned real estate private equity firm based in Boca Raton, Fla. Formed in 2014 by Todd and Jeff Rosenberg, Pebb Capital has a dedicated capital allocation and uses its 40-year real estate investment, development and management experience to deploy that capital with high quality operating partners in all types of real estate asset classes throughout the country under a variety of joint venture structures.

HFF’s investment sales team secured more than $1.68 billion in sales of retail assets nationally through the end of the second quarters of 2014. In Florida, HFF closed more than $539 million in retail transactions across all capital markets platforms during the same period.