The new owner plans to implement a $6.8 million capital improvement plan at the property. 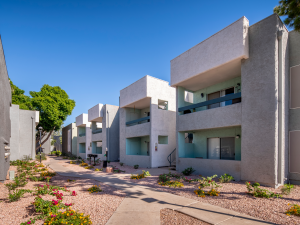 Tides Equities has paid $49.8 million for Dimension on 27th, a 260-unit multifamily community in Phoenix, and will rebrand it to Tides on 27th. According to Yardi Matrix data, the asset previously changed hands in 2017, when Jevan Capital acquired it for $11.3 million. ABI Multifamily brokered the deal on behalf of both parties.

Built in 1982, Dimension of 27th incorporates 23 buildings with studio, one- and two-bedroom floorplans averaging 680 square feet. All apartments have stainless-steel appliances, vinyl-wood flooring and balconies or patios. Common-area amenities include a playground, two swimming pools, a spa and three laundry facilities, along with 388 parking spaces. The new owner plans to implement a $6.8 million capital improvement plan at the property.

The garden-style community occupies a 8.4-acre site at 6131 N. 27th Ave., just west of Interstate 17 and roughly 7 miles northwest of downtown Phoenix. Various dining and retail options are within walking distance and Grand Canyon University is less than 2 miles from the property.

Dimension on 27th marks Tides’ 66th purchase in Phoenix since 2016. In early 202, the firm partnered with CIM Group for the second-largest, single-asset multifamily transaction in Arizona history.