Walker & Dunlop arranged the loans for a mixed-use project being built on the site of a former quarry in Columbus. 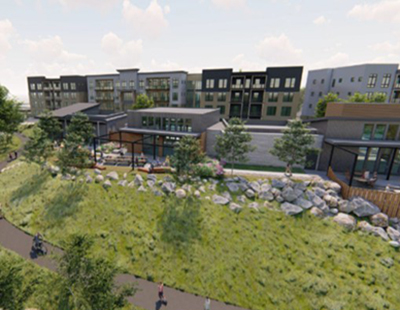 Rendering of Quarry Trails. Image courtesy of Thrive Cos.

Thrive Cos. has received $55.5 million in construction and permanent financing for development of the first phase of Quarry Trails Apartments and Quarry Trails Townhomes and Flats, a 293-unit multifamily and 100-unit townhome mixed-use project located within a decommissioned quarry in Columbus, Ohio. Phase I of the adaptive reuse project will also include an office building, 20,000 square feet of retail and a community center.

Walker & Dunlop arranged the package which was described as having a competitive three-year construction and semi-permanent financing term and a five-year financing term, respectively. Managing Directors Jeff Morris and Chad Kiner and Director A.J. Mangan of Walker & Dunlop’s Ohio Capital Markets group arranged the financing and identified two banks local to the Columbus region to finance the land acquisition and construction.

Calling it a unique development, Kiner said the architectural style of the project is complementary to the former limestone quarry’s landscape.

Formerly known as Wagenbrenner Development, Thrive Cos. expects to complete the first phase in the fall. Also scheduled for opening in the fall is the initial phase of what will eventually be a 180-acre park being developed through a partnership with the Columbus and Franklin County Metro Parks. Within the park are a 60-foot waterfall, 160-foot vertical rock face and more than 2 miles of riverfront trails. Plans calls for mountain bike trails, walking trails, a dog park and access points for kayaking, canoeing, paddle boating and fishing.

Thrive Cos. is developing about 80 acres as part of a $650 million project that will take from five to 10 years to build out and eventually have more than 1,000 apartments, 317 townhomes/flats and 289 freestanding condominiums, according to The Columbus Dispatch newspaper. The entire site is more than 600 acres and about 250 acres on the northern part of the property is still an active quarry. Once that quarry closes, Thrive Cos. may also develop the rest of the property.

In October, Thrive Cos.’ Founders Park project in Columbus was listed fifth in Multi-Housing News’ Top 10 multifamily projects under construction in Ohio, based on Yardi Matrix data as of September. Founders Park will be a mixed-use community with 342 rental units, 38 single-family residences, 50 for-sale townhomes, a 200-unit senior living community, a 160-key hotel, 6-acre park and about 7,000 square feet of retail. The first phase of apartments is scheduled to be completed early this year. Thrive Cos. is partnering with Daimler Group, Continental Real Estate, Fortress Real Estate and M/I Homes on the project.