Construction will start this month, with move-ins scheduled for late 2024. 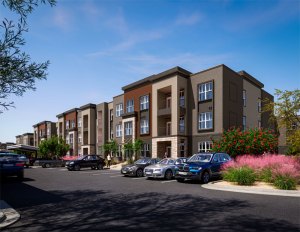 Thompson Thrift is expanding its presence in the Phoenix metro with its 252-unit residential project in Buckeye, Ariz. The developer will start construction on The Maddox this month and is expecting to see the first move-ins in late 2024.

Located at the intersection of West Yuma Road and South Waterson Road, The Maddox will be within walking distance to the city’s main retail corridor. Residents also have access to I-10, which connects them to downtown Phoenix, the Loop 303 corridor that’s seeing an industrial boom, and the area’s major employers including the Luke Air Force Base, Amazon Distribution and Abrazo West Campus. According to Thompson Thrift, Kore Power, Inc. is also planning to build a manufacturing facility a few miles away from the community that’s expected to bring 3,000 jobs.

Josh Purvis, managing partner for Thompson Thrift Residential, said in prepared remarks that Phoenix’s West Valley submarket is seeing significant job growth and demand for multifamily housing. Purvis added in his prepared remarks that the population in Buckeye has grown rapidly in recent years and that the market hasn’t seen a new Class A apartment community in more than 10 years.

For Thompson Thrift, The Maddox will be the company’s fifth community in Arizona. The developer previously sold its 216-unit garden-style community called The Wyatt in Gilbert, Ariz. for $91 million. More recently, Thompson Thrift acquired a 35-acre parcel that will be used to develop a 300-unit mixed-use community also in Gilbert.

Outside of Arizona, Thompson Thrift has been busy with other multifamily projects across the U.S. In total, the developer has worked on more than $4 billion of ground-up development projects across the Midwest, Southeast and Southwest, including a proposed 336-unit community in Greeley, Colo. that was announced earlier this month.