The Most Competitive Rental Markets in 2022

Miami is the nation’s hottest apartment market, followed by mid-sized locations in the Northeast, according to RentCafe.com.

As most cities across the U.S. are buzzing with renting activity, a recent study by RentCafe.com revealed the most competitive multifamily markets in the first part of 2022. Florida is by far the most sought-after region when it comes to renting, largely due to a wave of new renters seeking warm weather and looser restrictions during the pandemic. Specifically, the Miami metro area is the hottest apartment market in the entire U.S., boasting high occupancy rates, low supply and record-high lease renewal rates. 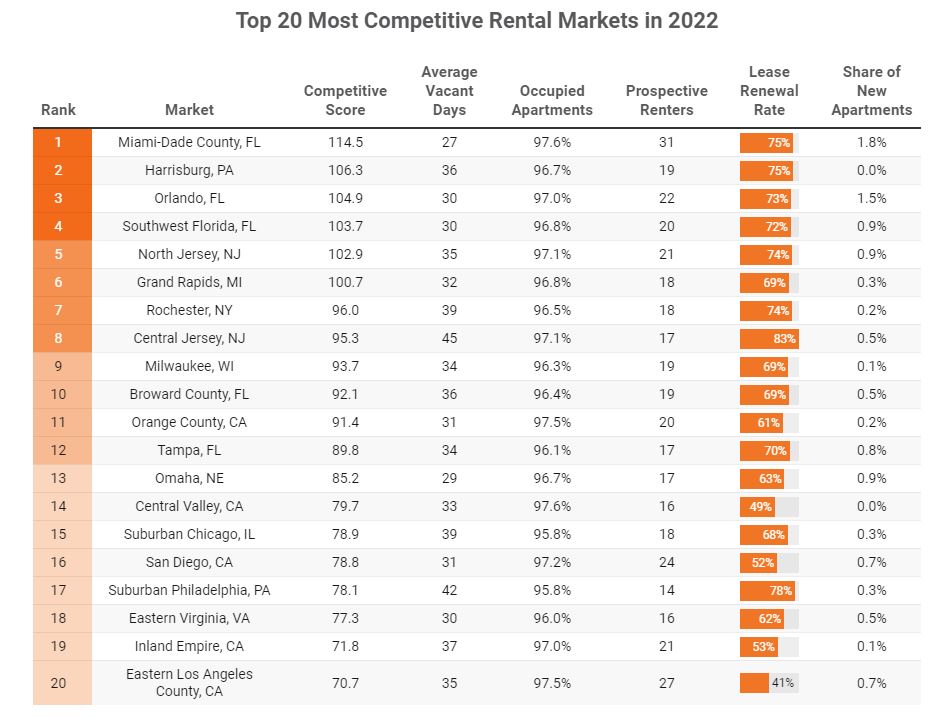 To rank the hottest apartment markets, RentCafe.com’s research team looked at the 100 largest markets in the U.S. where data was available, analyzing five revealing metrics in terms of competitivity:

The paradox of this year’s multifamily rental landscape is that most of the nation’s most sought-after markets have seen an increased new supply pipeline in the past years, but that’s still not enough to accommodate the soaring demand for rental apartments. In addition, more and more house hunters are starting to feel the strain of surging inflation and mortgage rates, so they are delaying of even giving up on their dream to become homeowners, which only intensifies the rental market in most cities.

On a national level, rental units that became vacant were filled within 35 days on average in the first part of the year, and as many as 14 prospects competed for one apartment to secure a lease. What’s more, 95.5 percent of the rental units nationwide were occupied during the same time period, as almost two-thirds of renters renewed their leases. The number of units completed in the first part of 2022 accounted for a mere 0.7 percent of the total housing supply, putting even more pressure on the rental market nationwide.

Riding the wave of migration to Florida during and after the pandemic, Miami is a hotspot for tech and finance professionals relocating from New York City and other similar markets. More so, the Miami metro area expanded its rental stock by 1.8 percent between January and April, but new completions simply cannot keep up with skyrocketing demand in this market. With a high occupancy rate of 976 percent, as many as 31 prospective renters competed for a vacant unit here, and it only took 27 days on average for a rental apartment to be occupied. 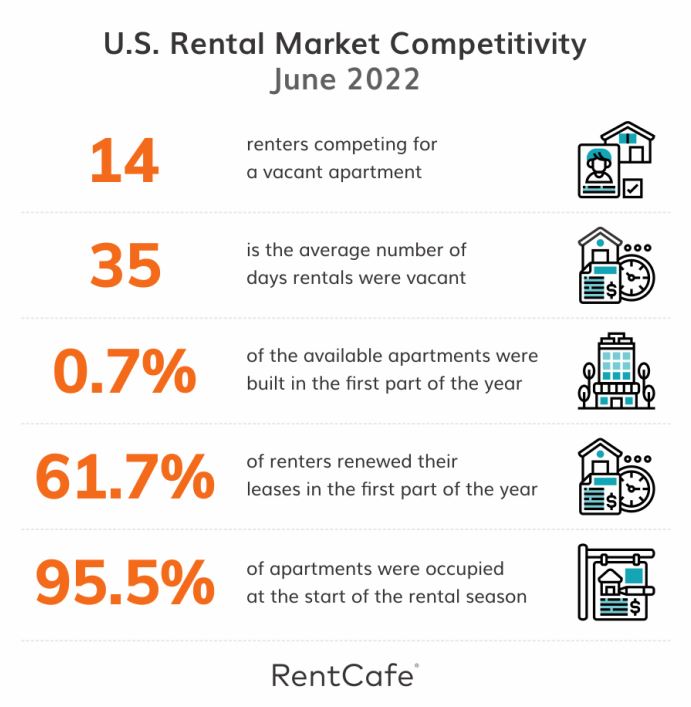 Harrisburg, Pa., is the second most competitive rental market in the nation—it helps that the city is just a couple hours away from Philadelphia, Washington, D.C. and New York City. With no new apartments completed between April and January, about 75 percent of renters chose to renew their leases, creating a highly competitive rental market. As a result, the average rental unit was filled in just 36 days, with 19 prospects competing for an apartment here.

Another Florida market that’s red-hot this rental season is Orlando, where the recovering hospitality industry and the thriving entrepreneur scene have been attracting lots of newcomers looking for good job opportunities. As a consequence, Orlando is far from meeting the growing demand for housing, despite a supply increase of 1.5 percent compared to the end of 2021. Boasting an occupancy rate of 97 percent, the average Orlando rental unit was filled in 30 days, and 22 renters competed to secure a lease for that apartment.

Competition Intensifies in the Northeast, While Midwestern Markets Get Hotter

And while not everybody can move to Florida, renting in the Northeast is just as good. In recent years, North Jersey has welcomed a lot of working-from-home renters relocating from densely populated cities, particularly from New York City. Jersey City, N.J., has become a favorite renting spot for former Manhattanites looking for better job opportunities and larger apartments that fit their budgets.

Other Northeastern markets that are very sought-after this rental season are Rochester, N.Y.; Central Jersey; and suburban Philadelphia.

OC is California’s Most Competitive Market

Boasting a more relaxed lifestyle, cheaper entertainment options and a booming economy, Orange County has seen an influx of renters outprices by Los Angeles’ high cost of living and housing.

Similarly, rental markets in Southern and Central California are getting more competitive, largely due to the rise of e-commerce and warehousing, as well as a lower cost of living. As a result, many renters seek better deals in Central valley and the Inland Empire.