The residential buildings at The Shops at Big Deahl will comprise 487 mixed-income units. 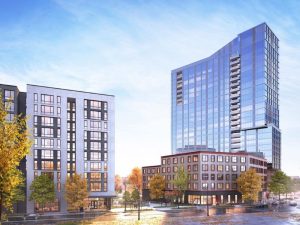 The Shops at Big Deahl. Image courtesy of Structured Development

Structured Development has broken ground on the first two residential buildings at The Shops at Big Deahl, a mixed-income development that will bring a total of 487 mixed-income units in Chicago.

The two buildings will join the recently completed Movement Lincoln Park—a 40,000 square-foot climbing, yoga and fitness gym that opened this fall. The groundbreaking of Building A, a 27-story, 327-unit building which is also part of the mixed-income development is slated for the spring of 2022.

The Seng’s two- to four-bedroom units will remain affordable in perpetuity, allowing resident homeowners to build equity. Each condo comes with a deeded ground-floor parking spot.

Common Lincoln Park will have one- to four-bedroom furnished units with a communal kitchen and living area, as well as in-unit laundry. Most of the bedrooms will also have en suite baths. Community amenities are slated to include a fitness center, co-working spoaces, a community lounge, a screening room and outdoor terraces. Common will manage and lease the property.

The Shops at Big Deahl is located at 1450 N. Dayton St., within the Near North pilot area, which is included in the ARO since 2017. The location requires Structured Development to set aside 20 percent of the project’s units as affordable housing.

The Shops at Big Deahl is situated around Seng Park, a half-acre green space with community gardens, a dog park and a playground. A link to the Wild Mile will also be available, further enhancing a live-work-play lifestyle. Located some 2 miles southeast from the Clybourn retail district—home to NEWCITY, another Structured mixed-use property—and the CTA Red Line, the property is also within 4 miles northwest of downtown Chicago.