Standing Up for Seniors 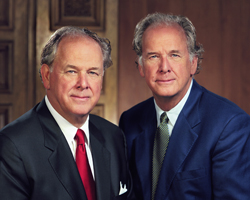 For plenty of people, running a business with your sibling, no matter how amicable your relationship, might sound like a daunting—even undesirable—challenge. Identical twins Robert  (Bob) and William (Bill) Thomas of Tulsa, Okla., the co-founders and managing principals of Senior Star, talk about it differently.

“It’s been one of the most delightful pleasures of my entire life,” says Bill Thomas. Both brothers give much of the credit for their extensive community service and close sibling relationship to their parents, the late William and Gretchen Thomas.

“We just had the good fortune that our parents instilled this sense of comradeship and wanting the other to excel. We were partners in little businesses since we were mowing lawns when we were 9 years old,” says Bob.

The collaboration and relative lack of competition (both say, “Neither one of us wants to be CEO”) has aided the brothers as they have built their business, which now includes 13 senior communities located  in six states, and is hoping to double in size over the next three to four years.

In 2011, Senior Star partnered with Health Care REIT, which has aided in the expansion efforts. In the process, the Thomases have delegated all daily management responsibility to their executive team, freeing up Bill and Bob to focus on community, advocacy and other personal passions.

With nearly 40 years in the real estate industry, and the last 25 spent focused exclusively on seniors housing, the Thomases have grown their company at the same time that American elder care facilities have been front line witnesses to the huge growth in patients affected by Alzheimer’s disease. Bob Thomas, a national volunteer, former board member and now fundraiser for the Alzheimer’s Association and Alzheimer’s Impact Movement, compares it to an impending tsunami.

As of 2013, the Alzheimer’s Association reported that one in three American seniors died with Alzheimer’s or another form of dementia, and the disease had moved into the No. 1 spot as the nation’s most expensive. In 2014, direct costs for caring for the 5 million Americans living with the disease are estimated at $214 billion, including $150 billion in costs to Medicare and Medicaid.

Approaching that wave from two different angles, Bob has focused on fundraising for  a cure and awareness and advocacy work at the local and national level. Bill has tackled it on the ground, encouraging American Seniors Housing Association (ASHA) involvement and pushing forward a high standard of care for every Senior Star community, one that emanates equally from every employee.

Both Thomases describe themselves as passionate about helping others and engaging diverse groups of people to support their cause—from their employees, to residents’ families, to members of Congress whose decisions support research funding.

“They view the community not only through the lens of today, but what we need to be doing to make sure that our community thrives and grows and prospers. They’re very strategic thinkers. They’re looking beyond the here to what can be,” says Mark Graham, President/CEO of the Tulsa Area United Way (TAUW). In 2002, the brothers raised $25 million for TAUW, a fundraising record that wasn’t bested until 10 years later. The campaign jump-started the Thomases’ efforts into running major donation drives.

Bob Thomas isn’t just committed to putting his own money toward finding a cure for Alzheimer’s. He vows to stick to the cause for the long haul.

“I didn’t know, initially, that I would never leave it until it is resolved,” he says. “There’s not a waking day that I have that I don’t think about this cause.”

He travels regularly and frequently to Washington, D.C. and to senators’ home districts to push for allocating more funds to research, and also targets his own political giving toward those who may advance the fight. For his efforts, he was awarded the Maureen Reagan Outstanding Advocate Award, which recognizes exemplary Alzheimer’s advocacy.

“Bob has made major contributions to advancing our mission, most recently through advances in public policy that have the potential to change the very course of the disease. Bob’s energy, ability and dedication continue to make a huge difference not just for those facing Alzheimer’s today, but also for the potential millions and millions of people who will one day be spared its devastating impact,” says Harry Johns, president and CEO of the Alzheimer’s Association.

Relationships are at the core of everything the Thomas brothers do—and that starts with their own close connection as identical twins.

“We grew up with this empathy for each other. We’ve been partners now since we were 24 years old,” says Bill Thomas. “We’re best friends; we always have been. We’ve had three great additional business partners throughout the years, and because of the relationship Bob and I have, we’ve treated them like we treat each other.  Don’t think about yourself. Think about: ‘What am I going to do for the other guy today?’”

That’s similar to how employees at Senior Star are encouraged to treat their residents. Associates at all 13 communities are trained in best practices for working with individuals living with Alzheimer’s and dementia, even going through simulations that capture some of the disorientation and loss of sensory abilities that patients can endure.

It was the company’s employees who brought the increasing instances of Alzheimer’s symptoms in their residents to the brothers’ attention 17 years ago, at an annual retreat.

“They said, ‘We are really becoming social workers,’” Bob Thomas recalls. “At the time we were only involved in independent living. They told us, ‘We’re the ones who are starting to see the signs of Alzheimer’s in our residents. We’re the ones talking to families, helping to assist them in terms of the caregiving, and then finding them the most appropriate place to stay.’”

The next week, Bob asked to become a member of the local Alzheimer’s Association board. The brothers were already involved in Tulsa’s active philanthropic community. Over the years, Bill estimates, they’ve helped raise well more than $50 million for a wide variety of causes like schools, seniors, medical research and the arts.

Fundraising as a business plan

Despite being a relatively small seniors housing provider, with about 2,200 residents nationwide, Senior Star is a national partner of the Alzheimer’s Association’s annual Walk to End Alzheimer’s®. Participation in the walk among the company’s 1,000-plus employees is high. So are their individual efforts to raise funds for Alzheimer’s research, which are encouraged by their employer.

“We have a system to help our entire company learn to be fundraisers,” Bob Thomas explains. “Fundraising also gives them an opportunity to reach out to our family members and establish a different kind of connection.”

The company hopes to raise $255,000  through The Walk to End Alzheimer’s this year… That means each community and the corporate office will be tasked with raising on average nearly $16,000. Contributions made through Senior Star fundraising teams will be matched (by Bob & Bill) up to the company’s goal amount. It’s a small dent in what they believe could be a much larger industry-wide contribution. Bill determined that if the 50 largest senior housing operators together had results similar to Senior Star from each of their communities, the $3,000,000 raised in 2013 by ASHA national team participants in the Walk to End Alzheimer’s would have been at least 20 times greater. The Thomases are encouraging the industry to gain more of its philanthropic potential.

Sharon Oliver, front desk supervisor for Senior Star at Burgundy Place in Tulsa, is one of the company’s top employee fundraisers, having raised over $5,500 so far. She says her motivation for supporting the Alzheimer’s cause is both personal and professional.

“I see it every day here, and mostly I see the residents and family members when they’ve first realized that their loved one is struggling with the disease. That’s the saddest time,” she says. Oliver recently moved  her aunt, an Alzheimer’s patient, into an advanced care facility because she had forgotten how to walk.

Whether employees have personal connections with the disease within their own families or not, they all openly support the cause, even if just by donating a few dollars in exchange for permission to wear jeans to work one day or purchasing cookies from an employee bake sale.

“All of us try to raise money for it,” Oliver says. “I would be doing this whether or not I worked here, and if I retired, I’d still be fundraising. I’ll always do something. I think it’s worth raising as much money as you can every year.” It seems a safe bet that her employers would agree.