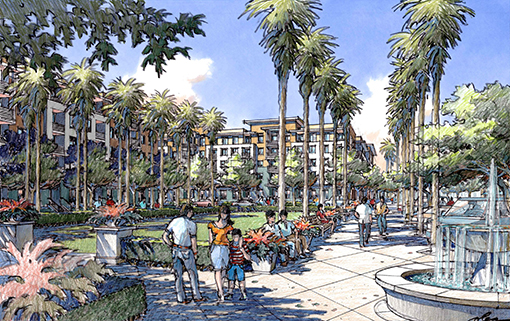 The first of two phases will commence this month and will entail the construction of an 11,500-square-foot retail center, the building of approximately 580 luxury apartments and condominiums and the creation of a park with concert green, courtyard with lounge-style seating and a children’s tot lot.

“Uptown Newport is the first project that meets the City of Newport Beach’s vision as outlined in the city’s general plan for transforming former commercial and industrial sites in the airport area into a unique urban village,” William Shopoff, president and CEO of The Shopoff Group, tells MHN. “[The village] will bring a mix of upscale high-density residential, retail and recreational uses to the area around John Wayne Airport.”

Advancing the development beyond the proposal stage involved a very close collaboration throughout the planning and design process between The Shopoff Group and the Newport Beach Planning Commission, city staff, the city council and the surrounding community. 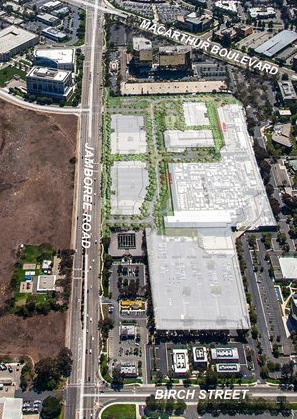 The goal, Shopoff says, was “to make sure our project met the goals of the city’s general plan for bringing new vitality to the area. We had to be very diligent during the process to incorporate architecture and landscaping that is fitting for an urban setting and exemplifies the lifestyle and quality of Newport Beach.”

As the first project of its kind in the John Wayne Airport area of Newport Beach, Uptown Newport will be a catalyst for luring dynamic new housing, recreational and retail improvements to the surrounding area, Shopoff says. The project will provide more than $30 million in Phase I developer fees to the City of Newport Beach, and will generate more than $600,000 in annual tax revenue for the city.

“The project will improve the local environment by reducing greenhouse gases and the carbon footprint of the site,” Shopoff adds. “It will also include the installation of a new storm water runoff treatment system that will help protect and improve water quality in Newport Beach’s Back Bay.”