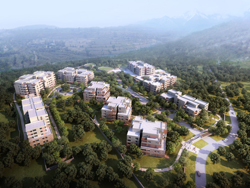 Whether through fictional accounts such as Grandpa Simpson’s home on The Simpsons, or actual accounts of resort-style senior communities that are popping up across the U.S. to accommodate the nation’s retiring Baby Boomers, senior housing is a very real entity in American culture and has been for some time. But abroad, particularly in developing countries, the idea of senior independence through a continuing care retirement community (CCRC) is a relatively new concept that is starting to take root and has serious potential.

About 150 miles north of New Delhi, on the western side of the subcontinent and nestled at the base of the Mussoorie Hills in Dehradun, India, one such development is underway. Antara Senior Living, a part of multi-business corporation Max India Group, is developing its first of many senior communities, Antara Dehradun, which is striving to bring a contemporary approach to senior housing to a population that has yet to experience it.

“The scenario in many developed countries is contrary to the scenario in India,” Tara Singh Vachani, CEO Antara Senior Living tells MHN. “Senior living is a well-established concept in many other countries, while in India it is still at a nascent stage.”

Singh Vachani says that interest in senior living is growing in India, citing a 2013 AZ Research Company study that found that three out of every four seniors are open to moving to an assisted senior living community.

Planning for Antara Dehradun began in 2011, and  Antara Senior Living tapped New York-based architecture firm Perkins Eastman and Spain’s Esteva | Esteva Arquitectura to design the community. The community is currently under construction and all parties have met challenges head on.

Perkins Eastman, which has an extensive international portfolio in senior housing, knows that designing for projects on foreign soil requires a broad understanding of culture, economic systems and knowledge of the environment in which the project will be developed. “Working in any foreign country, you do need to learn a lot so that the building is appropriate for that location,” says Bradford Perkins, chairman, FAIA, MRAIC, AICP and founding partner at Perkins Eastman. “You can’t just transplant a U.S. model and a U.S. design. It is done, but it’s inappropriate without reflecting on such basic things as how do they build buildings there. In most of the developing world they use materials that are indigenous, and they use systems that reflect what is cost-effective there and what works best for the client.”

Perkins sites several examples-—stone work and its laborers, for example—of why an international project might include materials that would be labor intensive and costly in the U.S. but work well in an international setting.

He says that stone work and the highly skilled labor required is expensive in the U.S.

“In India, [the workers are] also highly skilled, but they’re not very highly paid, so the use of stone for flooring or wall material is a relatively reasonable choice,” he says.

Perkins adds that a majority of the constructions efforts have been through client-preferred contractors, but that Perkins Eastman tried to incorporate local products into design elements, such as furniture, whenever possible.

“Interior designers shopped the showrooms of Delhi to see what they could get there, and if it wasn’t available they provided illustrations to see if they could find it somewhere else,” he says. “It’s a big country; they make a lot of things. They’re better at some things than others, but it’s not like China where they make everything.”

It’s not necessarily just the labor factor and the available materials that determine the flow of the design. Perkins says that geography and weather play an integral role in the design of the community noting India’s climate, which cycles between a brutally hot and dry season and a wet and rainy monsoon season.

“You have extreme heat, and then during the monsoon period, extreme rain conditions,” he says. “So during the heat period, dust is a big issue even in a relatively lush area like Dehradun. You tend not to use a lot of carpeting because it collects dirt.”

Another weather-related design element is the use of “eyebrows” over inset windows that serves the dual purpose of providing shade during the hotter months and protection from rain during the heavy monsoon storms.

An additional requirement in designing Antara Dehradun was the incorporation of Vastu Shastra principles, which Perkins describes as a design style with a religious element.

“Vastu is India’s version of Feng Shui,” he explains. “It is based upon, as is Feng Shui, things that have a religious base, but a lot of it has to do with your living environment.”

A Vastu principle employed at Antara is the positioning of the high point on a building to be on the southwest side “as to provide shade during the high point of the sun’s path.”

Other principles include the use of rectangular or square plots, which are considered beneficial from all aspects, and that plots having only one road and facing northeast facilitate prosperity.

Perkins Eastman worked with a Vastu consultant on the project in order to factor the design style into everything from the site plan to the individual units.

“We did our best to reflect his advice,” Perkins says.

He adds says that although design, materials and labor aspects might differ country to country, the concept of a CCRC remains relatively unchanged.

“Most seniors want to live as independently as possible for as long as possible and the physical environment can make that easier,” explains Perkins.

When complete, Antara Dehradun will be situated on about 20 acres and will offer more than 200 senior apartments ranging from 1,500 square feet to 10,000 square feet. The target demographic for the community is seniors 60 or above, who currently reside in India or non-resident Indians seeking to relocate to India after their careers have ended.

On the Antara Senior Living side of the equation, Singh Vachani says that Antara has performed thorough studies of Western senior housing to determine standards for the type of community it wants to create.

“There is a huge scope of evolution in this sector in India,” she says. “For Antara’s first community, we used the West as a benchmark as we realized that no such product or service existed in India. At a macro or a micro level, there was no provision for this demographic. The more we studied the concept, [the more] we realized that the model that worked the best is CCRC.”

One of the reasons, she says, that Antara Senior Living opted for the CCRC model was that they wanted to provide a comprehensive lifestyle that would allow seniors to live there for the duration of their lives without having to worry about concerning issues ranging from healthcare to companionship and social activities. This includes active living and assisted living, as well as memory care and acute medical care.

Also, Antara Senior Living intends to “keep in mind the unique physiological and psychological needs of seniors” by implementing design guidelines set forth by the Americans with Disabilities Act, such as providing all-weather access, step-free access to buildings, the elimination of tripping hazards and other such standards.

Once completed, Antara Dehradun will include a host of services and amenities for its residents to stay active and socially engaged through five dimensions of wellness or holistic living, which include physical wellness, social and emotional wellness, intellectual and occupational wellness, spiritual wellness and environmental wellness.

In order to accomplish this, Antara Dehradun will feature a gymnasium, an indoor swimming pool, yoga and Pilates classes, a tennis and badminton court, putting greens as well as social venues such as a 50,000 square foot clubhouse, a 50-seat state-of-the-art theater, a restaurant and café, private dining areas for family functions and a well-stocked library.

“We are clearly unique in terms of the research we have done,” Singh Vachani says. “[In] the design and architecture, we are
following the ‘look-feel-smell-touch’ of everything we will be creating within the community and last, but not the least, our inspiration sets us apart from everyone else. Being a part of Max India Group, our parentage and DNA obliges us to give service the utmost
importance and do it in a way where we focus on ‘seva bhav’ and excellence’.”