Soul is scheduled for completion in the second quarter of 2024. 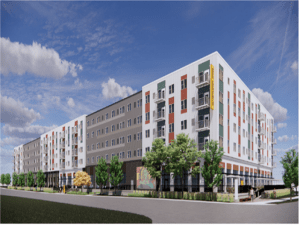 The equity provider for the development is RBC Capital Markets. Weis Builders is the general contractor and Kaas Wilson Architects is the project’s architect. The community is currently underway, with an expected delivery in the second quarter of 2024.

Soul will be constructed on a redevelopment site of a city infill location, purchased by Schafer from the American Red Cross. The site is located at the intersection of Robert Street and Plato Boulevard, in the West Side neighborhood. There are several dining options, retail centers and entertainment venues in the area. Saint Paul Downtown Airport is within one mile from the site.

Merchants Capital also provided a $15.5 million HUD loan for an affordable senior housing community in East Chicago, Ind. DTM Real Estate is developing the 206-unit project, which is designated for seniors over the age of 60 and earning 60 percent of the area median income.