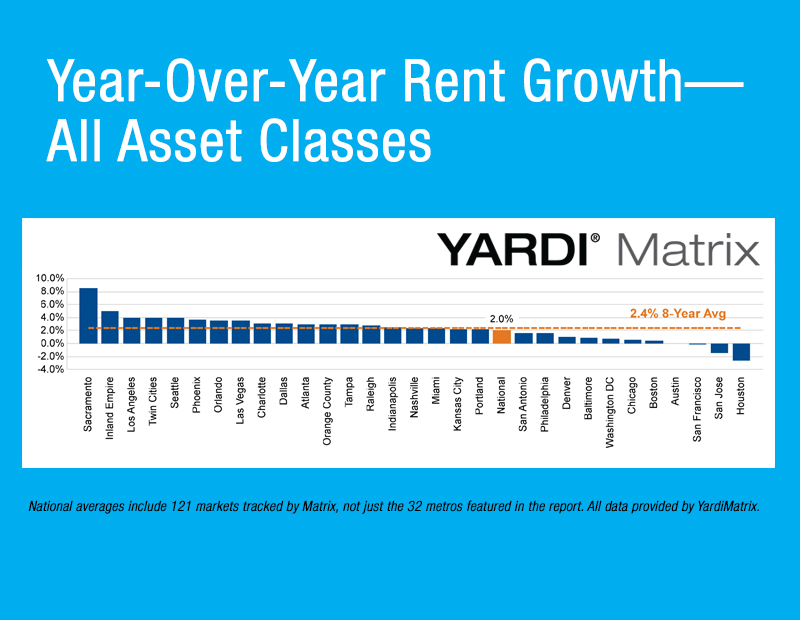 While multifamily rent rates continued to grow in April, Yardi Matrix reports in its monthly survey of 121 markets that April’s figure is now less than the long-term average growth rate. Average U.S. monthly rents increased by $3 to $1,314. On a year-over-year basis, rents increased 2 percent, which is the smallest growth rate seen since April 2011, when rates increased 1.5 percent.

The report asserts that the current deceleration has been expected for months, “given the rapid increase in supply and the inevitable return to growth that is more in line with income gains.” Recent years have seen unprecedented growth in most metros, where rent growth exceeded the rate of income gains as the renter population multiplied and supply dwindled. Now, rents have peaked and are unattainable for most average renters while supply is at its cyclical peaks.

“We expect upwards of 363,000 units to come online in 2017, with the number of deliveries declining in 2018 and 2019,” the report predicts. According to Yardi Matrix, the impact of new supply can be gauged by the disparity in growth between property segments. On a nationwide basis, rents have increased for working-class Renters-by-Necessity, whose rents have increased by 3.3 percent year-over-year. In contrast, upscale Lifestyle properties rents have increased by only .7 percent. The analysis reveals that approximately 80 percent of new supply is in the Lifestyle segment, even though demand is driven by middle-class renters in most areas.