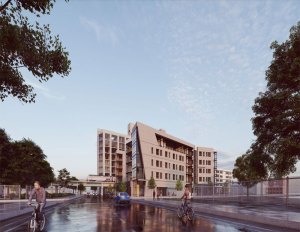 Post Brothers has landed a pair of loans to help with the development of its market-rate multifamily project, The Darien, in Philadelphia’s Poplar neighborhood. Lionheart Strategic Management provided a $18.5 mezzanine loan to the firm, underneath a nearly $53.8 million senior loan that was provided by Bank OZK. Lionheart’s Andy Klein and Sang Kim arranged the financing.

Post Brothers has already broken ground on The Darien, which will be built on a site that’s currently vacant. The luxury residential building will have its 212 units spread across five stories. The Darien will be next to the firm’s recently completed project called The Poplar, where the developer converted a warehouse that was originally built in 1918 into a 285-unit luxury multifamily community. Future residents at The Darien will have access to The Poplar’s amenities, which include a fitness center, children’s playroom, rooftop dog park, resident lounge, and sauna and steam rooms.

Located at 900-18 N. Eighth St. and 900 N. Darien St. residents will have nearby access to SEPTA’s Route 15 that runs along Girard Avenue. The Darien will also be roughly 2 miles away from downtown Philadelphia’s and its many restaurant and retail options.

This isn’t the first time Lionheart has worked with Post Brothers. The firm provided a $43.1 mezzanine loan behind a $134.9 million senior mortgage from Natixis that was used to refinance The Piazza, Post Brothers’ 404-unit multifamily complex in Philadelphia. Outside of Philadelphia, Lionheart recently provided a $45 million mezzanine loan that would be used to develop an ultra-high-luxury community in Miami.