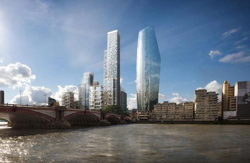 Upon completion, which is expected to occur between mid-2020 and early 2023, the development will include a total of nine buildings, the tallest of which will be a 48-story residential high-rise. Three of the new structures will be located on the western Ludgate House side of the site, while the remaining six are slated to rise on the eastern side of the Sampson House location.

Residents and visitors will be able to enjoy large areas of open space, including a 4,300-square-foot children’s square and a new 16,250-square-foot public square bordered by retail, leisure and cultural space in the lower floors of the new buildings.

As a result of the new development, the London Borough of Southwark, the Greater London Authority and Transport for London will benefit from a £75 million (nearly$120 million) Section 106 investment. The amount includes a £65 million ($103.5 million) affordable housing contribution, which will help bring create 260 new affordable homes in Southwark.

“Our vision of an exciting new urban quarter on this prime Thames-side location has taken a significant step towards realization with the council’s decision to provide planning consent for our project. The site, which is right on the river, is currently extremely under-utilized from a physical, social, employment as well as cultural perspective and the support we have received from the local community and Southwark Council throughout this process, and last night, endorses our belief in the need for change. This is a once in a generation opportunity to create a vibrant new destination area, with homes, retail and leisure facilities which brings thousands of new jobs to the area, while at the same time allowing us to make a significant contribution to Southwark’s wider housing requirements,” Mark Harris, managing director at The Carlyle Group, says.

“This is an amazingly exciting project which will bring new homes, new jobs and new opportunities for Southwark and its’ residents—everyone in our borough can benefit from developments like this. It is further proof that Southwark is the new vital heart of London and is not afraid to play its part in leading the whole city out of recession,” adds Councilor Peter John, leader of Southwark Council.