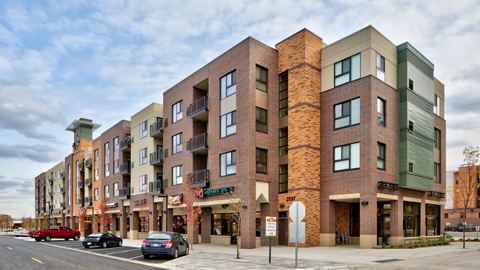 Generally when underground parking is part of the plan for a rental apartment project, the parking is actually built under the apartments. Not so with the Genesee apartments in Bloomington, Minn.

Designed by Elness Swanson Graham Architects, Minneapolis, the new rental property features a two-level, subterranean, garage built next to three apartment and rental townhome structures. The buildings are arranged in a U-shape around a central, surface-parking court that sits atop the two-level, below grade parking deck.

On the West side of the U is an eight-story rental apartment building built with light gauge metal stud-bearing walls, metal floor framing, and precast concrete stair and elevator cores providing lateral shear resistance. A two-level basement section connects to the central below-grade parking deck, which was built with long-span precast double tees. The building to the north is set on top of one level of underground parking that connects directly to the top level of the below-grade courtyard parking. Above the single-level parking deck there is retail space at street level and three floors of wood-framed apartments above. The four-story, wood-framed building to the south contains a number of rental townhomes.

The underground courtyard parking deck is built with long-span precast concrete double tees from Hanson Structural Precast, Maple Grove, Minn. On the north building, Hanson precast beams and hollow-core planks on the lower one-level parking ramp provide the podium for the apartments above.

Unfortunately this meant that the load of the eight-story tower would be bearing on an 8-in.-thick, concrete mat slab at grade level and this would put a surcharge on the soil that had to be resisted by the basement wall of the adjacent underground parking ramp. The solution, according to engineer Tim Morey, of Ericksen Roed & Associates, St. Paul, Minn., was a 12-in., solid precast wall at the interface. The soil pressure or earth load from the building side is transferred into the wall, then into the precast double tee system and all the way through the ramp to the other side, says Morey. “The precast wall,” Morey adds, “saved a considerable amount of money versus using deep foundations.”

The below-grade, courtyard garage and interface wall were built, back-filled and compacted. Then, the adjacent tower was
constructed. Erection of the precast components for the garages took just 24 days, and the entire project was completed in less than 15 months.

According to Joe Videle, vice president of property management for owner’s StuartCo, Inc., Minneapolis, “the project includes two rooftop terrace decks for resident lounging and socializing. These are heated with large space heaters, and one has a kitchenette. There’s an outdoor pool, grill area and sundeck, and a cyber-lounge with free Wi-Fi and coffee bar. We have a theater room for private movie parties and an event area with a fully-appointed kitchen and stainless steel appliances that is adjacent to both the sun deck and the theater room and that holds a couple of hundred people. The project even has a concierge.”

Amenities include a large fitness and workout facility with cardio and weight equipment. This, says Videle, includes “Fitness on Request” equipment. “You press a button and a wall-size screen comes down with an interactive workout video. You simply select the style of workout you want, from kick-boxing to yoga, and off you go. It’s sort of a digital personal trainer.”
Situated 12 miles from downtown Minneapolis, the project location was primed for multifamily development, adds Videle. Known as the Southtown neighborhood, the area is part of a city redevelopment vision.

“The city had widened the streets and done a lot of streetscaping,” explains Videle. “There is a retail and commercial complex right across the intersection from our site that has large shops, boutiques, banks, grocery stores and restaurants. All of this was in before we broke ground. So we had the shopping and commerce before we started. We were actually the first housing component situated so close to the Southtown neighborhood.”