The $35 million Brick Stone Apartments will include 150 units. Phase one is expected to be completed in the second quarter of 2019. 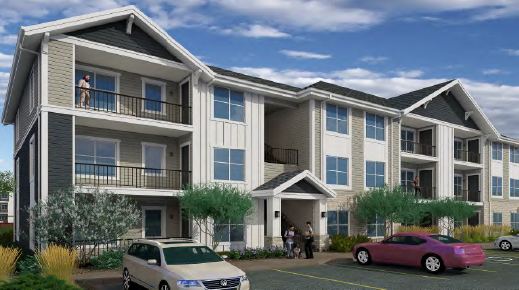 Origin Investments and SEEC Enterprises plan to begin construction on Brick Stone Apartments in Denver. The property is a $35 million, 150-unit garden-style community in a high-growth Denver corridor. Units are expected to be delivered in phases starting in the second quarter of 2019.

The all-in cost of the development including land and construction costs comes to almost $235,000 per apartment.

“There are a number of reasons we believe this represents a very strong development opportunity,” Thomas Briney, Origin Investments’ director of acquisitions, told MHN. “The development site is in the line of strong population and employment growth in this area of Denver. Thousands of jobs are being created by the expansion of the Denver Airport and the development of the new Gaylord Hotel and Conference Center, along with other significant economic drivers.”

He added Origin Investments partnered with SEEC Enterprises because Brick Stone Apartments replicates a project the latter has already developed and constructed in other parts of the country. “They’ve refined those plans and value-engineered elements [making] the development of Brick Stone even more efficient,” he added

Features and finishes of apartments will include stainless steel appliances, in-unit washer-dryers, designer cabinets, walk-in closets and state-of-the-art high-speed connectivity. Common-area amenities will include a fitness center, a swimming pool, a dog-wash station and direct access to the First Creek Trail.

Centrally located in a 56th Street submarket that allows convenient access throughout the entire Denver metropolitan area, Brick Stone Apartments is near two light rail stations, one of which will put residents one stop from Denver International Airport. Pena Blvd., I-70 and E-470 are also easily accessed.

“Equally as impressive, the site has direct access to the newly completed First Creek Greenway, providing hiking and biking access to the 16,000-acre Rocky Mountain National Wildlife Refuge,” Briney said. “Our partner, SEEC, had previously gained control of the site approximately 18 months ago.”