Hibernia Apartments, a 100-unit property, includes a 16,000-square-foot ground-floor retail space that will be filled by a grocery store. 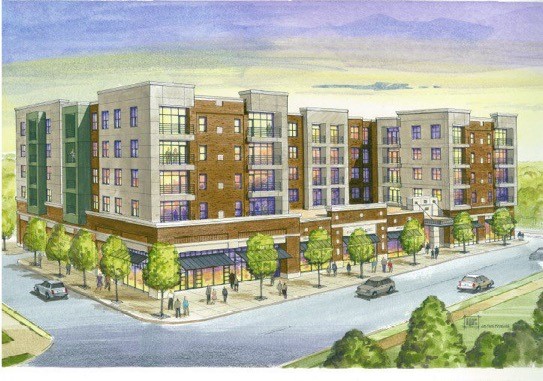 The St. Louis regional office of Minneapolis-based NorthMarq Capital Inc. has arranged for $20 million in construction financing for Hibernia Apartments, a 100-unit apartment community on the west side of St. Louis.

The development features a 16,000-square-foot ground-floor retail space that will be filled by an area grocery store. It is located in the traditionally Irish Dogtown district on St. Louis’s west side, adjacent to the better-known Italian-American enclave of The Hill.

Among Dogtown’s traditions is its Ancient Order of Hibernians’ St. Patrick’s Day Parade.

NorthMarq’s arranged the financing for the borrower through its relationship with The Bank of Washington. The 140-year-old bank is among the oldest, largest independent community banks in metro St. Louis and one of the area’s largest commercial lenders.

“We are excited about the development of the Hibernia Apartments in the historic neighborhood of Dogtown,” said Jeff Tegethoff, principal for Pearl Companies of Indianapolis, the project’s developer.

“We have been working on the development for over a year, and are excited to break ground in the near future. NorthMarq found us a great local banking relationship and we are looking forward to adding this property to a great neighborhood.”

Residents of the Hibernia Apartments will have easy access to several area attractions, including Forest Park, the St. Louis Zoo, Washington University, Missouri Botanical Garden and the nationally-acclaimed Italian eateries of The Hill.