Next on Sixth: Competition in Koreatown

How do you stand out in a rapidly growing market? How about adding a mini Target? That’s a key feature of NEXT on Sixth, an apartment building under construction at 600 S. Virgil Ave. in Los Angeles’ rapidly gentrifying Koreatown.

How do you stand out in a rapidly growing market? How about adding a mini Target?

That’s a key feature of NEXT on Sixth, an apartment complex under construction at 600 S. Virgil Ave. in Los Angeles’ rapidly gentrifying Koreatown. The 398-unit property will also sport a two-story fitness center, a golf simulator and a video arcade. A path will wind through the Zen garden that faces the units overlooking the courtyard, which will include an 18,000-square-foot pool deck with barbecue pits and dining areas.

Century West Partners, an L.A.-based apartment developer, is developing the property as its second Koreatown complex and one of more than 30 new apartment, mixed-use, condo and hotel buildings under development there. The apartments alone will total nearly 3,000 units, according to a recent report in the Los Angeles Business Journal.

That’s a lot of competition, but Century West has more than a 22,000-square-foot Target store up its sleeve. Each street-facing unit in this neighborhood of low-rise buildings will have a balcony, many with views of the Hollywood Hills.

Century West also took advantage of the size of NEXT on Sixth, which takes up an entire city block, to make the building stand out in another way. On the eastern and western corners, at Sixth and Virgil and Sixth and Commonwealth, artists will adorn the building with 25-by-35-foot murals that represent their visions of Koreatown. Century West secured permission for the designs from the city’s Art Commission and the blessing of neighborhood residents, according to Farrell.

“Fifield loves to do art on their projects when we can,” Farrell said. “We usually do art that stands out in a planter in the front of the building, so this is a new one for us.”

The murals will be 300 feet apart and installed on the diagonal so drivers at both busy intersections can get a good look. The art doesn’t stop there. 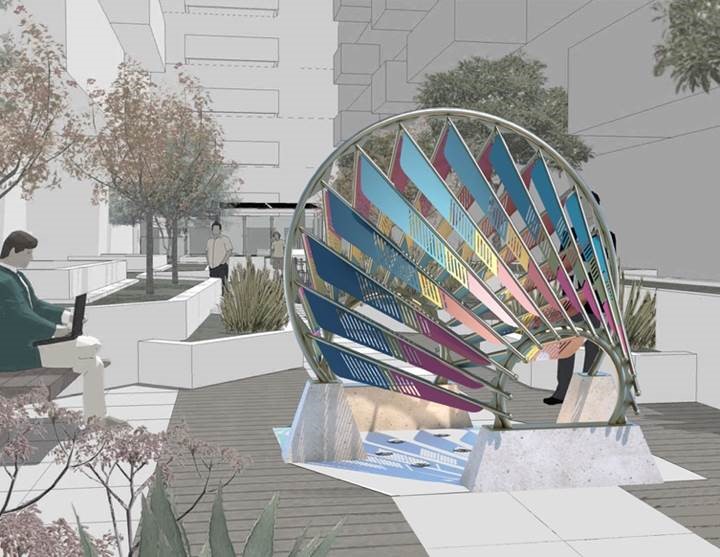 “We also have a really interesting metal-and-glass art piece that we commissioned for the courtyard, which is not open to the public, but it’s the pool deck courtyard that all the residents will use,” Farrell said.

In the corridors, Century West will hang 3-by-5-foot custom prints that Farrell described as “super-bright and colorful and hip.”

Forty-five percent of the units will be one-bedrooms, followed by 40 percent as studios and about 15 percent two-bedrooms. Rents will average “north of $3.50” per square foot, Farrell noted.

NEXT on Sixth is transit-oriented, too. Located on the eastern edge of Koreatown, it is just three blocks from a Red Line subway station, and thus 11 minutes from downtown. Just five blocks away stands Century West’s three-building complex K2LA, which Farrell described as “very comparable” in luxury amenities to its newest building. Phase 1 of K2LA opened in 2014, followed by phases 2 and 3 in 2016. Their 480 units are fully leased.

Located three miles west of downtown L.A., Koreatown has had its ups and downs. In the 1960s, it was a welcoming community for Korean immigrants, who preserved many Art Deco-era buildings by opening businesses in them. The 1992 riots that followed the beating of Rodney King decimated many Korean-owned businesses and inflamed racial tensions among Koreans and African-Americans.

Koreatown’s demographics also began to change. Its residents now are primarily Latino, although Koreans represent the next-largest group. It’s the most highly populated neighborhood in the city, and most residents are apartment dwellers, with a median household income of $36,818 in 2015. Real estate developers have begun to turn empty lots and rundown properties into apartment buildings, condos and hotels.

NEXT on Sixth will replace a city block that Farrell described as a mishmash of basketball courts, parking lots, weedy lots, junky trees and chain-link fences. Century West broke ground in April 2015, with plans for a September 2017 opening.

“We are confident that the combination of location, unit finishes and amenities will drive leasing and retention of residents,” Farrell said. “The artwork will give the building a special image within the community that reinforces the already strong architecture of the building.”

Originally appearing in the September 2017 issue of MHN.