The Grove was developed in the footprint of an historic lumber yard in Astoria. 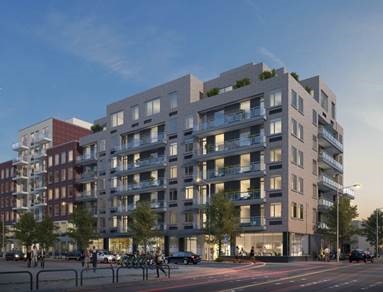 New York—Queen’s newest rental development, The Grove, which is in the Astoria neighborhood, has kicked off leasing. The brokerage firm Modern Spaces was retained by Tsilo Group, the developer, as the leasing agent for the 62-unit project, which is at 30-40 21st St.

The property offers a mix of studios, one- and two-bedrooms units. The apartments will feature washers and dryers, as well as maple hardwood floors. The Grove was developed in the footprint of an historic lumber yard in Astoria, so the maplewood floors are a nod to the area’s past, noted Modern Spaces CEO Eric Benaim.

In our time, “demand for new construction rentals has been on the rise in Astoria,” Benaim said. Astoria is indeed a popular neighborhood, with average rents for studios averaging $1,878 a month in January, according to MHS; $2,110 for a one-bedroom unit; and $2,425 for two-bedroom units. The Grove’s rents are somewhat higher.

Common amenities at the Grove include a resident’s gym with private fitness training sessions available, a virtual doorman, a package room and a landscaped rooftop with lounges and sun bathing areas. The Grove also offers bike and car parking and storage space.

This is Modern Spaces’ second project with Tsilo Group. The two companies previously worked together on the lease up of Icon52 in the Woodside neighborhood of Queens. Greg Kyroglou of Modern Spaces, a lifelong Astoria resident, is head of leasing at The Grove.