The nonprofit Jamboree Housing Corp. has completed its latest affordable housing project, the Arbor at Woodbury Apartment Homes, a 90-unit, six-building property in the company's hometown of Irvine, Calif. The development is designed to provide housing for families earning between 30 percent and 60 percent of the area's median income. 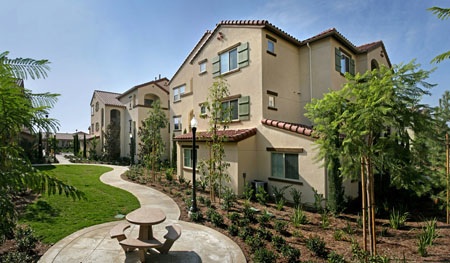 Irvine, Calif.–The nonprofit Jamboree Housing Corp. has completed its latest affordable housing project, the Arbor at Woodbury Apartment Homes, a 90-unit, six-building property in the company’s hometown of Irvine, Calif. The development is designed to provide housing for families earning between 30 percent and 60 percent of the area’s median income.

That puts rents at the complex between $523 to $1,450 per month, depending on family size and income level. For example, a family of four earning $46,500 (which is half of area median income) will pay about $1,140 per month in rent for a three-bedroom at the property. The Arbor at Woodbury has 18 one-bedroom, 43 two-bedroom and 29 three-bedroom garden-style apartments.

Demand continues to grow for this kind of development, Jamboree COO Mary Jo Goelzer tells Multi-Housing News. “During lease up, our interest lists have swollen to new highs, with more applicants coming from foreclosed single-family homes and others who list unemployment benefits as the primary source of household income,” she says. “The need for workforce housing in southern California is as strong as ever, challenging us to discover new financial resources and to leverage our existing community partnerships to meet the need.”

The Arbor at Woodbury is part of the Woodbury Master Plan in eastern Irvine that will ultimately include a mix of single-family detached homes, townhomes, condominiums and rental apartments. Like much of the rest of Irving, the Woodbury Master Plan calls for neighborhood squares, gardens and a park situated around a 30-acre central gathering place called “the Commons,” which will feature athletic fields, a playground, recreation center, and swimming pools for neighborhood use.

Since the city of Irvine known for closely controlling the aesthetics of new projects within its borders, the Arbor at Woodbury aims to blend in with the overall look and feel of its surroundings. According to David Obitz, principal with KTGY Group Inc., the Arbor at Woodbury’s architect, the development “uses the same finishes and materials as surrounding market-rate properties, featuring a Mediterranean-style design integrates seamlessly into the neighborhood.”

Jamboree is no stranger to development in its hometown. In the summer of 2009, the nonprofit completed the 71-unit Granite Court in the Irvine Business Complex area, which is likewise open to families earning 30 percent to 60 percent of median income, and the nonprofit has completed the Meadows mobile home park and the Montecito Vista complex near Beckman High School as well.

The grand opening for the Arbor at Woodbury is slated for later in February. Jamboree is expecting to break ground this summer for a 135-unit community called Stonegate, also in Irvine. Jamboree’s overall portfolio includes the development of or an ownership interest in more than 6,500 affordable housing units in 55 communities in California.