Despite rents declining 0.5 percent year-over-year, more than 100 secondary and tertiary markets are performing better than the national average. 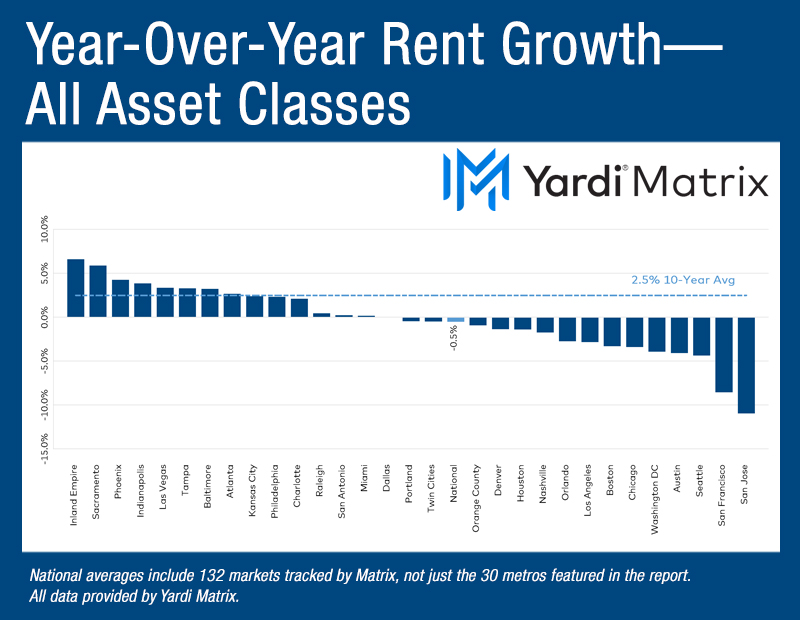 Multifamily rents declined for the sixth month in a row, declining by 0.5 percent in November year-over-year, according to a Yardi Matrix report of 127 markets. Despite this, more than 100 secondary and tertiary markets are performing better than the national average.

Once again, markets such as the Inland Empire, Sacramento, Phoenix and Indianapolis led the pack in terms of rent growth, increasing 6.6 percent, 5.9 percent, 4.3 percent and 3.9 percent, respectively.

Due to COVID-19, renters are putting a higher priority on space, looking to move into apartments outside the major cities that offer more flexibility, as well as single-family rental options. All gateway markets showed major declines in rent, increasingly more this month than the last:

Lifestyle assets declined 1.9 percent and continued to trail Renter-by-Necessity at 1.0 percent across the U.S.

In November, about 245,000 jobs were added, below market expectations. However, even with a weak payroll, the unemployment rate declined to 6.7 percent. Jobless claims remained high, with more than 700,000 new unemployment claims filed each week.