Despite a November decrease, the national rent growth level has remained at 3 percent or higher since last spring. 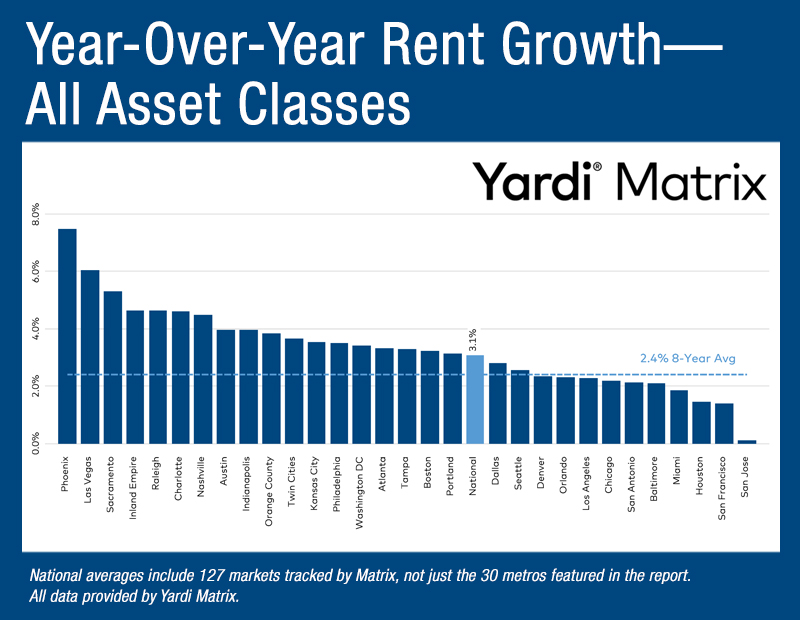 After showing a slight increase in the month of October, multifamily rents are back in the red. The average fell $3 in November to $1,473, showing a year-over-year rent growth decline of 20 basis points to 3.1 percent, according to a Yardi Matrix survey of 127 markets.

However, despite this slip, multifamily rent growth continues to be strong on a national level, remaining at 3 percent or higher every month since last spring. When it comes to absorption, 2019 marks the sixth year in a row that at least 250,000 units were absorbed, hitting 320,000 this year so far. According to the report, Seattle, Denver and Dallas topped the list, followed by Houston, Austin and Washington, D.C.

For national rent growth, the metro at the top was once again Phoenix at 7.5 percent, followed by Las Vegas at 6 percent. Rounding out the top of the list were Sacramento at 5.3 percent, and the Inland Empire, Raleigh, N.C. and Charlotte, S.C. tied at 4.6 percent. “Job growth and strong in-migration continue to fuel the desert Southwest. Demographic tailwinds are supporting a number of markets with robust new-supply pipelines…,” according to the report.