The national average rent marked a $12 increase in May, to $1,428, the largest increase yet recorded by Yardi Matrix. 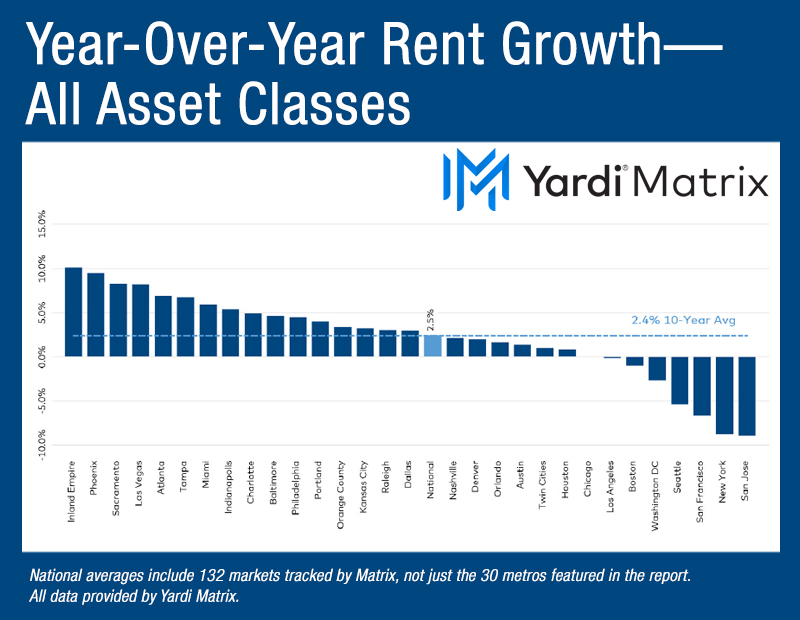 Positive momentum continued across the national multifamily market, with rent growth back to pre-pandemic levels, up 2.5 percent year-over-year in May, to $1,428. According to Yardi Matrix’s May survey, of the top 30 markets, 22 had positive year-over-year growth rates. On a month-over-month basis, the national average rent rose 0.8 percent, posting the largest increase since June 2015, while all top 30 metros had positive growth, and 90 percent registered gains of 0.5 percent or more.

The best performing metros on a year-over-year basis were the Inland Empire (10.2 percent, the highest rate in the metro’s history), Phoenix (9.6 percent) and Sacramento (8.3 percent). Of all gateway markets, Miami posted the strongest gains, up 6.0 percent. At the opposite end are San Jose (-9.0 percent), New York (-8.8 percent) and San Francisco (-6.7 percent).

All gateway markets showed signs of recovery—New York led all 30 top metros with an average rent growth of 3.4 percent on a month-over-month basis.  Lifestyle rents led growth there, up 4.8 percent. The rebound in the metro is likely driven by the financial sector, with the banking industry mandating that workers return to the office this summer. Slower performances were recorded in Seattle (0.2 percent MoM) and San Francisco (0.3 percent MoM). The lag is attributed to the large concentration of tech workers that are more likely to continue working on a hybrid or fully remote schedule.

During the four months of 2021, almost 120,000 units—0.8% of stock—were absorbed nationally, pointing to one of the best years since the 2008 recession. Dallas (8,200 units absorbed), Miami (5,700), Atlanta (5,400) and Phoenix (4,600) occupied top positions by the number of units absorbed. Absorption based on percentage of stock was highest in Nashville (2.1 percent of stock), Miami, Charlotte and Chicago (all 1.9 percent). At the bottom of the top 30 metros stood the Inland Empire (0.3 percent of stock, or 531 units year-to-date) and Sacramento (0.2 percent of stock, or 209 units). The two metros are relatively affordable compared to other California markets, but robust year-over-year rent increases seem to narrow the gap in the cost of living.

May marked the launch of Yardi Matrix’s data tracking single-family rentals, which comprises more than 90,000 units in 700 communities across the U.S. Rents in the asset class rose by 7.3 percent in May on a year-over-year basis, or by $14, to $1,761 with the Inland Empire (18.3 percent), Phoenix (15.3 percent) and Denver (13.5 percent) topping the list for year-over-year growth. Occupancy marked a 1.5 percent increase in the 12 months ending in April, to 96.6 percent.