The start of the spring seasonal growth arrived with new records for the multifamily market—rents gained $14, according to Yardi Matrix data. 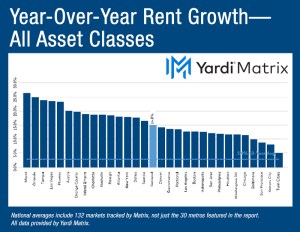 The national average asking rent has decelerated compared to the breakneck pace of 2021, but otherwise marked new record gains in March, according to the latest Yardi Matrix survey of 140 markets. The average U.S. growth rate slid 50 basis points to 14.8 percent on a year-over-year basis, bringing the overall average rent to an all-time high of $1,642, up $14. Rent performance during the first quarter of 2022 also marked a record, with rents up 2.1 percent, or $34. The overall asking rent is $212 higher than it was in March 2021.

It’s expected that rent growth will moderate below 2021 levels, especially compared to the levels seen in the second quarter. Household formation is also likely to soften this year—estimates put the number of new households formed in 2021 in the two million range, while for 2022, household growth and absorption are expected to drop to about half.

On a year-over-year basis, average rents rose by 20 percent or more in five of the top 30 metros and by 10 percent or more in 87 percent of the markets. Miami, Orlando, Tampa, Las Vegas and Phoenix led growth, while Baltimore (9.9 percent), San Francisco (8.7 percent), Kansas City (8.1 percent) and Twin Cities (5.1 percent) placed the lowest despite posting significant gains. Based on occupancy dropping in several markets, demand shows signs of dwindling in the Sun Belt and West markets—Phoenix posted the largest decrease (-0.5 percent), followed by the Inland Empire and Las Vegas (both -0.4 percent) and Sacramento (-0.3 percent).

On a month-over-month basis, asking rents rose 0.9 percent in March, and 0.3 percent above January and February. Rent growth was even between Renter-by-Necessity and Lifestyle segments, each advancing 0.8 percent. Typically marking the beginning of spring seasonal growth, March posted an increase slightly lower than 2021 (when rents rose 1.3 percent, or $18), but higher than what we’d see in a ‘normal’ year. San Jose (2.1 percent), Seattle (1.8 percent) and Chicago (1.6 percent) led growth, while Atlanta (0.1 percent) and Baltimore (-0.6 percent) posted the weakest performances. In Las Vegas, rent growth illustrated a bifurcation between property segments, with RBN asking rents rising a solid 2.0 percent, while Lifestyle inched up just 0.1 percent—this could point to cooling demand for upscale units and rising demand for working-class apartments in the metro.

The multifamily market’s remarkable performance in recent years is threatened by two main factors: Inflation and the war in Ukraine. To control the former, the Federal Reserve is increasing interest rates, which led the 10-year U.S. Treasury rate in late March to yield 2.4 percent—the highest in three years—and all signs point to an ongoing increase. These higher rates overlap with all-time lows for multifamily acquisition yields, which currently average about 4.5 percent and as low as the 3.0 percent range for assets in prime locations and high revenue stream. Low cap rates coupled with a risk-free rate of 1.0 percent and a mortgage coupon of 2.5 percent to 3.5 percent are not troubling at all. But with the cost of capital increasing, properties acquired at low cap rates must recover through high rent growth to reach yield targets if the 10-year Treasury rate rises above 3.0 percent, cited Ken Rosen, professor emeritus at the University of California, Berkeley, and chairman of real estate research firm Rosen Consulting—“I worry that (real estate professionals) forgot what it’s like in a normalized cap rate environment.”