March marked a milestone for the U.S. multifamily market, with rents appreciating 0.6 percent year-over-year, according to Yardi Matrix’s monthly survey of 134 markets. 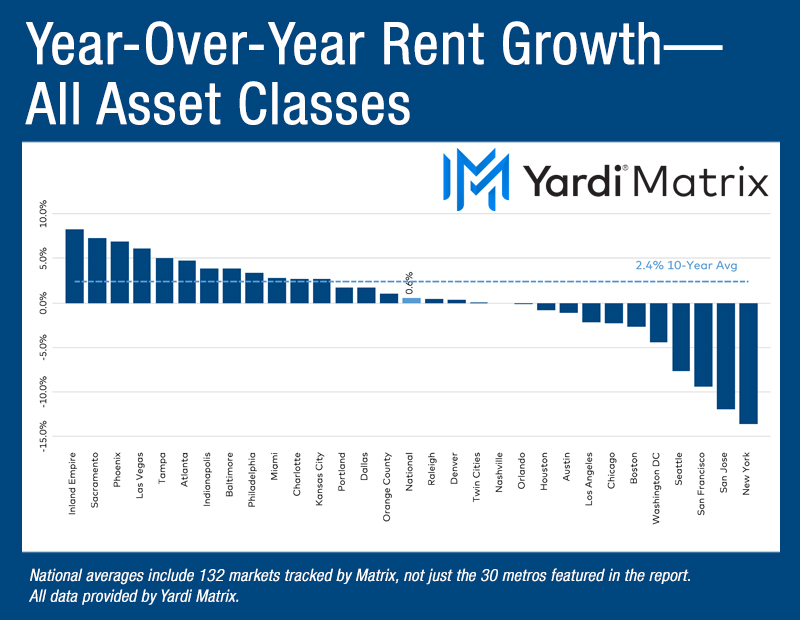 Lower-cost metros in the West continued on an upward trend, sustained by strong demand for housing—the Inland Empire (8.3 percent) Sacramento (7.3 percent) and Phoenix (6.9 percent) led all markets on a year-over-year basis. Limited new supply and robust migration boosted the average rent in Tampa (5.0 percent) and Atlanta (4.7 percent), where inventories expanded by 2.3 percent and 2.5 percent in the 12 months ending in March.

Rents remained on a downward trend in the metros most impacted by remote work and out-migration—New York (-13.6 percent YoY) and San Jose (-12.0 percent)—but even here there are signs of bottoming out. San Jose marked a 0.9 percent increase on a month-over-month basis, pointing to a possible turnaround.

Stock expansion is a big factor in the recovery of many metros. The most completions as a percentage of stock over the last 12 months ending in March were registered in Austin (4.4 percent YoY), Raleigh (3.9 percent), Twin Cities (3.9 percent) and Denver (3.8 percent). Rents appreciated by 0.4 percent and 0.1 percent in the Twin Cities and Denver on a year-over-year basis. Most gateway markets reported limited completions but have robust construction pipelines: Miami led with 14.6 percent of existing stock under construction, followed by San Francisco (8.2 percent) and Los Angeles (7.8 percent).

In Raleigh, the robust stock expansion caused rents to decline 0.9 percent month-over-month, but it could be just a one-month dip as the metro is sustained by strong economic fundamentals. On a year-over-year basis, the average marked an uptick of 0.5 percent. In Austin, inventory additions kept rent growth struggling since the onset of the pandemic, but in March, rents appreciated by 0.9 percent on a month-over-month basis, posting the strongest performance over the past year.