Despite impact from the coronavirus, rent growth increased 2.9 percent in March, according to a Yardi Matrix survey of 127 markets. 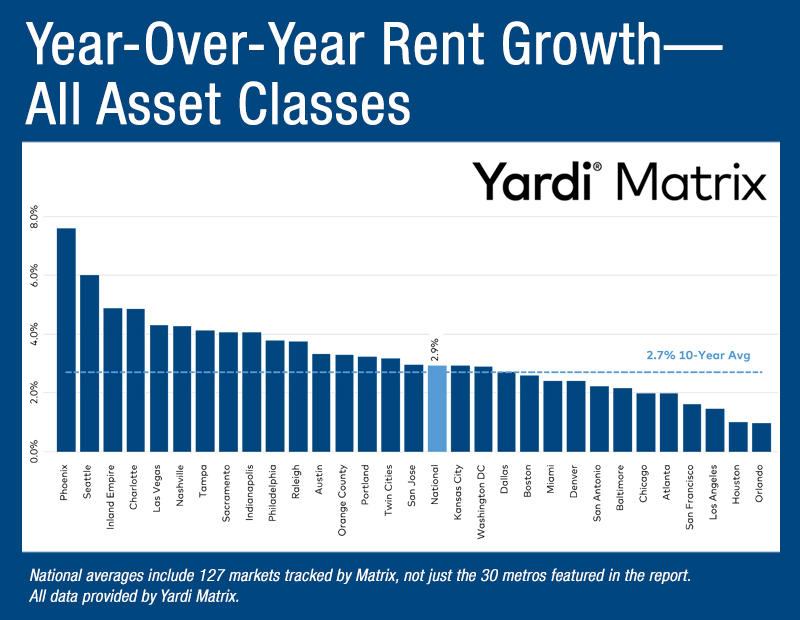 Although March was still a relatively successful month for the multifamily industry, showcasing a $6 rent increased from February, equating to a 2.9 percent jump year-over-year, the ongoing affects of the coronavirus presented the utmost of challenges for the market, which are continuing throughout the year, according to a Yardi Matrix report of 127 markets.

Phoenix once again led the list for market performance with a 7.6 percent rent growth. Following that is Seattle with 6 percent, Inland Empire and Charlotte (4.9 percent), Las Vegas (4.3 percent) and Tampa and Indianapolis (4.1 percent). Markets showing initial signs of a slowdown include Orlando and Houston, as leisure, hospitality and oil industries suffered the most from the impact of the coronavirus. Orlando’s rent growth in March reached its lowest level since 2011 and with oil hitting an 18-year low, Houston’s economy will likely continue to contract.

“In the last two weeks of the month alone, unemployment claims are expected to range between five and six million, far surpassing any two-week stretch in history,” notes the report. “Both private and public responses to the growing crisis are affecting the multifamily industry, and April 1 is likely to be a bellwether for the months to come.”