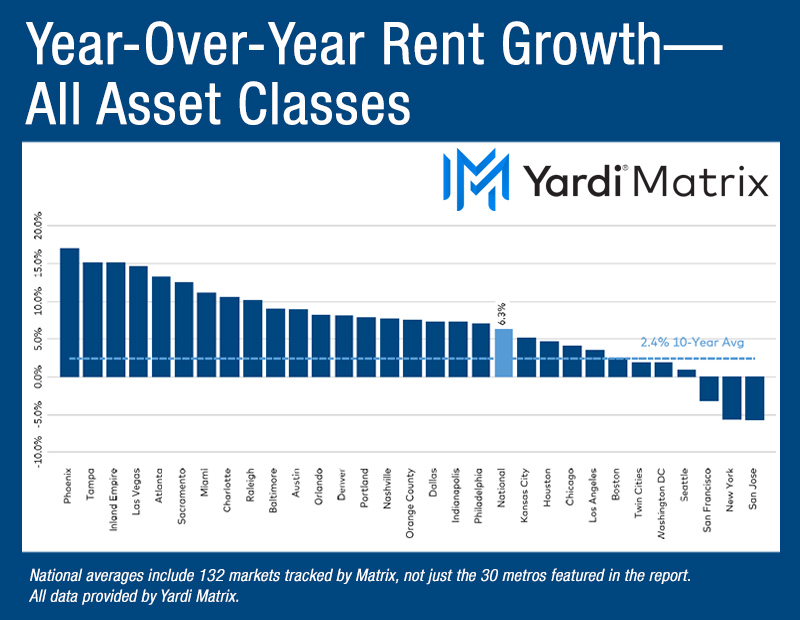 Multifamily rent growth has reached unprecedented levels according to Yardi Matrix’s June survey. Asking rents in June increased 6.3 percent over the previous 12 months, to an average of $1,482, the largest year-over-year increase in the history of the dataset. Rents increased nationally by 1.6 percent over the previous month. All of the top 30 markets reported positive month-over-month growth for the third month in a row, and 27 of those also reported positive year-over-year growth. For the first time since 2011, Lifestyle rents (7.2 percent) grew faster than Renter-by-Necessity rents (5.3 percent) on a year over year basis.

Rent growth was bolstered by migration to the Southeast and Southwest markets. Phoenix experienced 17.0 percent rent growth over the last 12 months. Tampa and the Inland Empire both increased 15.1 percent over the same period. Also notable were Las Vegas and Atlanta, which grew by 14.6 and 13.3 percent. These markets were previously seen as lower cost alternatives to gateway metros. According to Yardi Matrix. this level of growth is not sustainable long-term, but the expectation is that above-average growth in these markets will continue for several months.

Double digit rent increases in markets in the Southeast and Southwest mark that their affordability has begun to decline. Phoenix rents rose by an average of $200 through the past 12 months. Much of the migration into the metro came from higher cost locations where residents were used to paying higher rents. This has put more strain on longtime residents causing, them to downsize or find lower cost locations to live.

The single-family rental market also showed strong growth. Rents in the sector were up 11.1 percent year-over-year. All of the top 30 metros recorded positive year-over-year rent growth, with 17 posting growth rates in double digits. Markets with the largest rent growth were Tampa (31.3 percent), Phoenix (23.9 percent) and Miami (23.6 percent). Yardi Matrix believes that there is strong demand in the sector, as people are looking for more space. Occupancy was up 1.9 percent in May on a year-over-year basis. 24 of the top 30 metros had flat or increasing occupancy over the same period.

To read the full report, go to the Yardi Matrix website.