The average U.S. asking rent rose just $10 in July, to $1,717, the lowest increase since January, according to Yardi Matrix data. 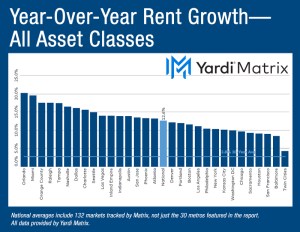 The moderation in rent growth likely stems from the slowing economy paired with an inevitable return to the mean. While record rent growth in 2021 was the result of record-high absorption (580,000 units), the softening in absorption—roughly half that pace in 2022—does not send negative signals but is instead falling into values representative of a typical solid year. In addition, the slowing economic growth and waning consumer confidence could cool rent gains, but not immediately, because the Federal Reserves’ 150-basis-point increase over the last two months has slowed the for-sale market. Therefore, demand for apartments could be boosted, as first-time homebuyers need to keep renting and wait for a more favorable time to buy.

A solid factor driving the recent rent growth has been the supply-demand imbalance. According to a new study commissioned by the National Multifamily Housing Council and the National Apartment Association, the U.S. has a 600,000-unit apartment shortage. Another 3.7 million units are needed through 2035 to meet demand. Of these, 40 percent, or roughly 1.5 million units, will be required in just three states: Texas, California and Florida. The study estimates that half of population growth is projected to be concentrated in nine metros, led by Dallas, Phoenix, Houston, Miami and Atlanta. Another factor observed is the aging of existing stock—78 percent of U.S. apartments were built before 2000, and each year, 0.5 percent of stock becomes obsolete. Yardi Matrix tracks nearly 1 million multifamily units under construction and forecasts some 400,000 deliveries annually for several years. While the numbers are promising, resolving America’s housing shortage—market-rate and affordable housing—will be lengthy. Some of the proposed solutions include providing density bonuses for projects with affordable components, passing tax abatements to rehabilitate older housing and expediting approvals for affordable housing.

Rents in the single-family rental sector were up 11.2 percent year-over-year, 60 basis points below the June rate. This means a $7 increase in July, to $2,092. Of Yardi Matrix’s top 35 metros, 21 posted rent gains of 10 percent or more. Orlando (43.3 percent), Nashville (21.5 percent) and Miami (20 percent) led growth. National occupancy rates declined by 30 basis points in June, down in 24 of the top 35 Yardi Matrix metros. The sector is not immune to rising interest rates as higher financing costs and fewer home sales will shrink the acquisition pipeline. Nonetheless, demand should persist, as residents who can no longer afford to purchase a home, will likely turn to the SFR sector.