Year-over-year rent growth rose to 3.4 percent, up 10 basis points from June, according to a Yardi Matrix survey of 127 markets. 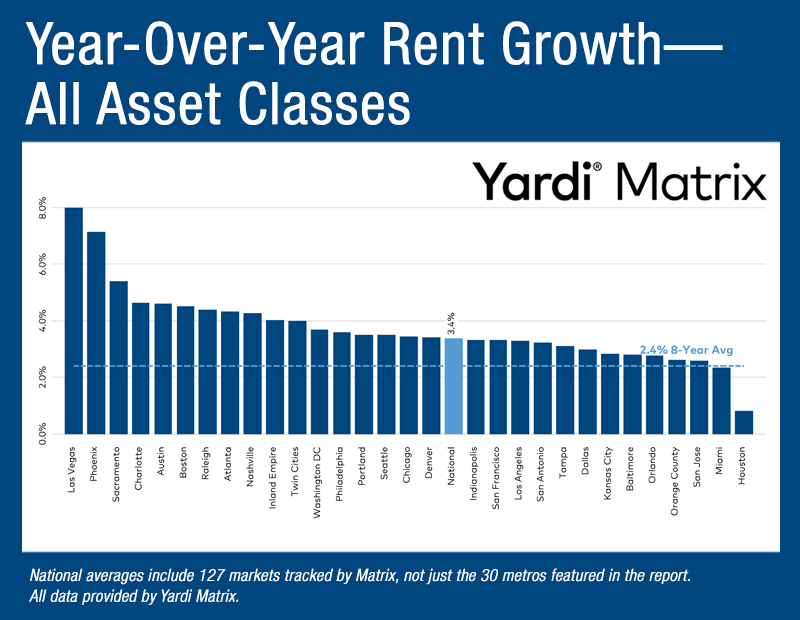 Multifamily rents for the year continued to rise in July, increasing $3 from last month to $1,469. Year-over-year rent growth rose to 3.4 percent, up 10 basis points from June, according to a Yardi Matrix survey of 127 markets. Annual rent growth has surpassed at least 3 percent for each of the past 13 months.

Lifestyle rents increased 3.1 percent in July, showcasing the strongest growth for the segment since September 2016, according to the report. However, for the last six years, Renter-by-Necessity rents have grown faster, with nearly 2 million luxury units having been delivered, which is lowering rent growth for the high-end market. The gap between Lifestyle and Renter-by-Necessity has hit 50 basis points, the lowest since May 2012.

When it comes to metro performance, Las Vegas once again tops the list showing an increase of 8 percent. The metro is starting to catch up to the national average, currently sitting only 25 percent below the mark. This is followed by Phoenix (7.1 percent) and Sacramento (5.4 percent), with Charlotte and Austin tied at a growth of 4.6 percent. “Fast-growing metros in the South and Southwest, metros with strong technology industries, established metros in the Northeast and Midwest—are all producing healthy gains,” noted the survey. The list of metros with the largest rent gains included Charlotte (4.6 percent), Raleigh (4.4 percent), Atlanta (4.3 percent) and Nashville increasing 4 percent. This is due mostly to the new supply.