In the middle of the winter slowdown, the national average rent rose $8, according to Yardi Matrix data. 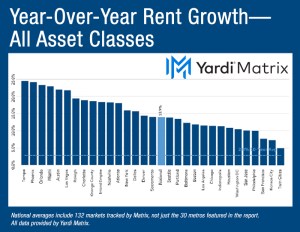 In the first month of 2022, the national average asking rent posted an $8 increase, to $1,604, marking yet another new high, according to the latest Yardi Matrix survey of 140 markets. The gain represents a 13.9 percent year-over-year increase, 30 basis points above December. Even though there’s a low likelihood that performance will remain as elevated throughout 2022, January’s rate signals continued demand.

The average U.S. asking rent rose to $1,600 from $1,500 in just seven months and $1,500 from $1,400 in 10 months. Previous $100 increment increases took two to three years or more, according to Paul Fiorilla, author of the report and associate director of research at Yardi Matrix. “The recent rent growth acceleration is unprecedented,” he said.

Nationally, the Lifestyle segment (16.5 percent) continued to outperform Renter-by-Necessity units (11.5 percent). New York posted a sharp discrepancy: Lifestyle rents were up 22.2 percent year-over-year, while RBN rents inched up just 1.8 percent. The explanation is likely to be found in the fact that Manhattan’s rebound has attracted many young workers; in addition, Lifestyle properties tend to be less subjected to rent controls than RBN assets.

On a month-over-month basis, asking rents rose 0.5 percent, up 40 basis points from December. Gains were led by San Jose. Although remote working persists, San Jose and San Francisco are rebounding. However, despite the leading performance in January, these metros have still a lot of ground to recover as rents here remain below pre-pandemic levels. Previous leaders in rent growth, Phoenix and Las Vegas both posted rent contractions of 0.1 percent in January.

Absorption marked a record year in 2021, with roughly 460,000 units absorbed—this is more than double the previous year and more than 50 percent above the previous annual high. Dallas and Houston were in the lead, and five of the next six highest were gateway metros—Miami, New York, Chicago, Washington and Los Angeles each absorbed 20,000 units or more. Furthermore, as a percentage of stock, all but one of the seven gateway markets topped the 4.0 percent national average. The exception was New York, and it also came in strong at 3.8 percent. The occupancy rate of stabilized properties rose 1.3 percent year-over-year through December, to 96.1 percent.

Multifamily transaction activity marked an all-time high in 2021, totaling $198 billion. This represents a solid 55 percent more than 2019’s pre-pandemic high of $128.6 billion and more than double 2020’s $95.4 billion total. The price per unit also reached an all-time high at $191,000, which is more than 20 percent above the previous high of $157,000 in 2020. Market conditions remain exceptional at the start of 2022—investors need to deploy debt and equity in stable assets like multifamily and industrial properties, and property owners want to use the low-interest rates.

The single-family-rental asking rent was up 13.5 percent year-over-year in January and occupancy rose 0.2 percent—Tampa and Miami led in rent growth with the rate above the 30 percent mark on a year-over-year basis, while San Antonio, Houston and Austin maintained the lead in occupancy performance. Although still relatively small, the sector points to sustained performance, boosted by increasing interest from a variety of investor types, which includes large institutions and foreign capital.