Still on a downward trend, year-over-year rent growth showed some positive signs, according to a Yardi Matrix survey of 130 markets. 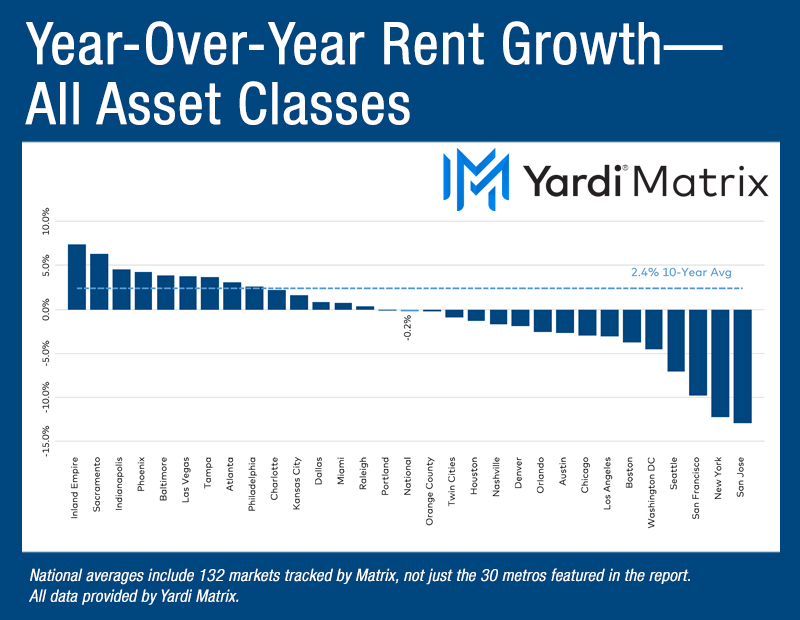 The decline of multifamily rents showed signs of softening, according to Yardi Matrix’s monthly report of 130 markets. Rents dropped 0.2 percent in January on a year-over-year basis, while on a month-over-month basis, the average rent marked a 20 basis-point rise, or an increase of $3 to $1,392. Although the average national rent is improving, of the top 30 markets, 16 posted declines.

Rents in the Lifestyle segment rose by 0.1 percent on a month-over-month basis in January, marking the first positive movement in the segment since February 2020. Meanwhile, Renter-by-Necessity rents continued rising, up by 0.3 percent.

Job loss or growth has not been directly proportional with declines or gains in rents and occupancy across metros, instead, a correlation to migration trends and living costs has emerged. Markets with the highest percentage of jobs in “at-risk employment sectors”—which included Las Vegas and some of the Florida markets—withstood the pandemic’s impacts aided by robust in-migration from higher-cost states like California and New York. Metros with the smallest percentage of jobs in at-risk employment sectors, like New York and Northern New Jersey, marked steep rent declines.