If current trends continue, February could be the last month to see a national decline, according to Yardi Matrix. 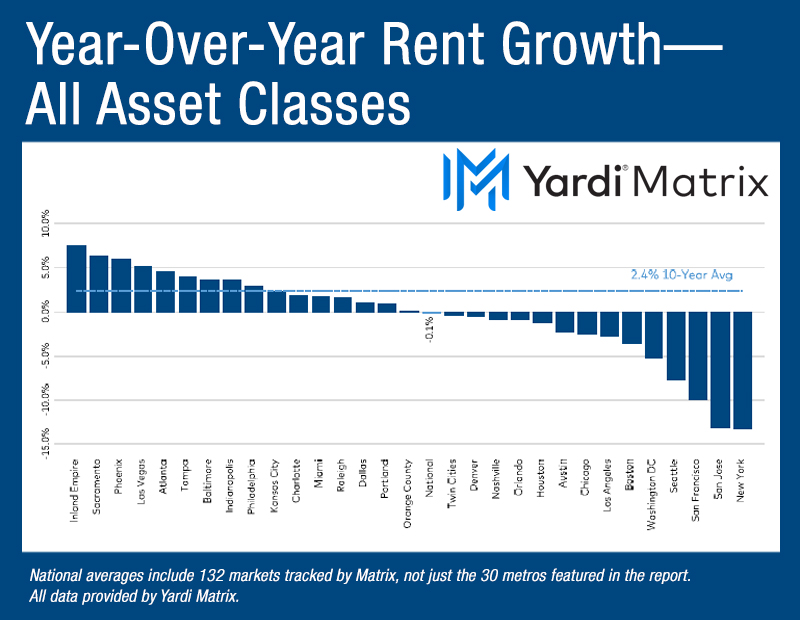 The decline in multifamily rents continued on a softening trend, as signs of recovery become clearer, according to Yardi Matrix’s monthly survey of 133 markets.

Even though the national rent growth was still negative in February—with year-over-year rents down 0.1 percent—on a month-over-month basis, the average rent appreciated by 20 basis points, up $3 to $1,399. If market conditions hold, February may well be the last month we see a national decline in rents. On a year-over-year basis, 16 of the top 30 markets remained flat or marked negative rent performance, posting a progressively moderating rate. On a month-over-month basis, 111 of the 133 surveyed markets had positive rent growth.

The Inland Empire (7.6 percent) and Sacramento (6.4 percent) maintained top positions for rent growth on a year-over-year basis through February. The two were also in the top three for occupancy growth, up 2.2 percent and 1.2 percent on a year-over-year basis as of January. Performance was sustained by strong migration and limited supply, of just 1.6 percent of total stock in the 12-months  ending in February.

Midwestern markets like Indianapolis (rents up 3.6 percent year-over-year) and Kansas City (up 2.3 percent) posted favorable performance on a year-over-year basis thanks to their affordability and limited new supply. On a month-over-month basis, of the top 30 markets, 23 had positive rent growth, with Phoenix (0.9 percent), Miami (0.8 percent) and Tampa (0.7 percent) posting the best rent gains.

The passage of a COVID relief bill in December 2020 boosted economic activity, and the recent $1.9 trillion stimulus bill is anticipated to galvanize the economy further, but the issue of high inflation is lurking. With spring marking the peak of leasing season, Yardi Matrix expects month-over-month rents to appreciate and even accelerate as the economy recovers.