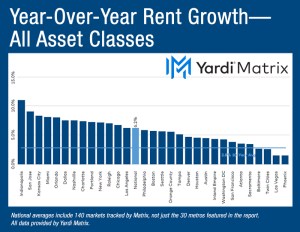 The year 2022 ended with multifamily rents declining another $4 to $1,715, according to Yardi Matrix’s latest survey of 140 markets. This represents a 6.2 percent year-over-year increase, down 80 basis points from November, and the lowest since May 2021. Still, the rate represents the second-highest annual growth, behind only 2021, when annual rents had increased by 15 percent. In 2023, rent growth is anticipated to fall back closer to historical levels and rise moderately. The single-family rental market also remained on a decelerating trend, with the average U.S. rent down $8 to $2,083 in December, up 4.8 percent.

On a month-over-month basis, the average U.S. multifamily rent declined 0.2 percent in December, or $4. The decline was once again led by the Lifestyle segment (-0.3 percent), while Renter-by-Necessity rents decreased by 0.1 percent. Rent rose only in New York (0.9 percent), Indianapolis (0.2 percent) and Houston (0.1 percent). By asset class, 28 of the top 30 metros had negative growth in Lifestyle units and 19 posted rent depreciation in the RBN segment. Boston rents marked the weakest performance, dropping 1.1 percent (up 5.7 percent on an annual basis).

Renewal rents rose 11.8 percent year-over-year through October, up 30 basis points from September, which shows that property owners strive to bring the rents of existing tenants closer to current asking rents. The rate in October is likely at or near the peak, since asking rents turned negative in November. Miami (19.2 percent), Tampa (18.9 percent) and Orlando (16.6 percent) held the top positions. National lease renewals were at 64.9 percent in October, maintaining a steady decline from the 68 percent peak recorded in the fourth quarter of 2021. Philadelphia (77.8 percent) and Baltimore (70.2 percent) led, while San Francisco (48.5 percent) and Los Angeles (49.3 percent) lagged.

Multifamily enters 2023 in a typical change of cycles, except that this one is unique due to a combination of lingering effects of COVID-19: the economic slowdown—which might turn into a recession in the second half of 2023—decelerating rent growth after two stellar years when asking rates increased 22 percent, weakening demand and household formation, and robust pressure on the transaction activity and property values.

The average asking rent in the SFR segment increased 4.8 percent year-over-year in December, 100 basis points below November. Asking rents in the segment dropped by $12 over the last two months as housing demand weakens. The occupancy rate declined 1.4 percent year-over-year through November, unchanged from the prior year, at 95.8 percent. The number of home sales has dropped as a consequence of the rising mortgage rates, and some owners renounce trying to sell and turn their homes into rentals, which adds to the volume of competitive stock. According to John Burns Real Estate Consulting, 9 percent of U.S. home sellers switched listings from sale to rental in November, with the highest rates of sellers doing so located in the Southwest (17 percent), Florida (15 percent) and the Northwest (14 percent).