Rents declined $4 to $1,462, marking the largest one-month decline since the beginning of the pandemic. 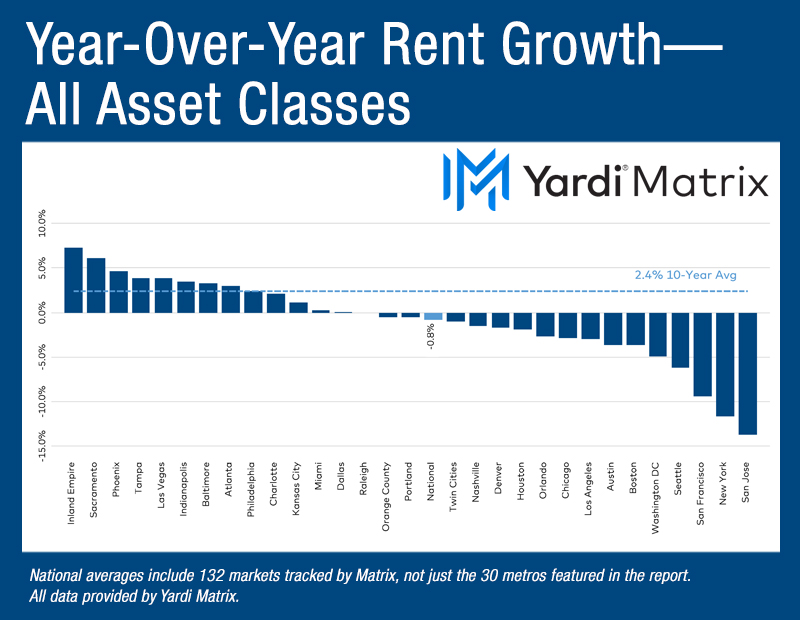 Multifamily rents continue to decline, showing a 0.8 percent drop in December on a year-over-year basis. Rents declined $4 to $1,462, dropping 30 basis points from the month before. This marks the largest one-month decline since the beginning of the pandemic, when rents dropped by $5 back in April.

The separation between gateway and lower-cost markets continues to grow, with the Inland Empire and Sacramento sitting at the top of the performance list with rent growths of 7.3 percent and 6.1 percent, respectively. On the other end, San Jose (-13.7 percent) and New York (-11.7 percent) sit at the bottom, where San Jose has been for the last seven consecutive months, falling 14.1 percent since March. However, during 2020, almost half of the top 30 markets finished the year with flat or positive year-over-year rent growth.

Lifestyle rents continued to underperform, declining 2.1 percent year-over-year nationally. Renter-by-Necessity on the other hand continued to increase, showing a jump of 0.6 percent.