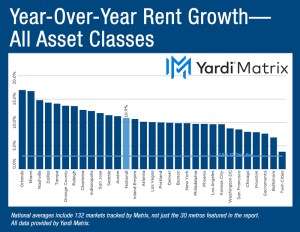 August marks the first month since June 2020 with tepid rent growth, according to Yardi Matrix’s latest survey of 140 markets, a trend that will likely linger by the end of the year. U.S. rent growth decelerated by 170 basis points to 10.9 percent on a year-over-year basis, to $1,718, down $1 month-over-month. Although softening, rents rose 6.6 percent on a year-to-date basis, higher than any year prior to 2021, and the national occupancy rate was 96.0 percent for the fifth straight month in July. Meanwhile, the average rent in the single-family rental sector also declined by $2 in August, to $2,090, with year-over-year growth down by 170 basis points to 9.5 percent.

Rent growth slowing is the response to the seasonality pattern—typically moderating in the fall—and to slowing migration and a cooling economy. In addition, this year comes after a period of unprecedented increases. Affordability is becoming an issue, with some examples of the trend being Orlando, Miami and Tampa, where year-over-year rent growth declined 7 to 8 percentage points over the last two months. This respite in the housing market drives demand but is met by rising inflation and a slowing job market, which lower residents’ ability to pay.

On an annual basis, rent growth remained strongest in Sun Belt markets—Orlando (16.9 percent), Miami (16.7 percent) and Nashville (14.8 percent). At the other end of the spectrum stood the Twin Cities (3.7 percent), Baltimore (6.7 percent) and Sacramento (7.5 percent). In gateway metros rent growth also posted robust performance—between 8 and 10 percent—boosted by the rise in occupancy as the rebound in the job market and rising wages bolstered household formation. The highest increases in occupancy over the year ending in July were in San Jose (1.5 percent), Chicago and San Francisco (each 0.8 percent) and New York (0.6 percent). The latter also posted the highest occupancy rate among major metros, up to 97.8 percent. Meanwhile, Las Vegas (-1.8 percent), Phoenix (-1.4 percent) and Sacramento (-1.0 percent) posted the largest occupancy decreases.

On a monthly basis, the overall national asking rent decreased 0.1 percent, with Renter-by-Necessity units posting a 20-basis-point increase in August, and Lifestyle rents declining by 20 basis points. Asking rents increased in just 10 markets of Yardi Matrix’s top 30 markets in August, led by Philadelphia, San Francisco and Nashville (each 0.5 percent). New York and Miami followed with increases of 0.3 percent each. The largest decreases in the monthly rents were registered in Raleigh (-1.3 percent), Seattle (-1.1 percent) and the Inland Empire and Las Vegas (each -0.8 percent). Lifestyle rents dropped in 21 of Yardi Matrix’s top 30 markets, led by Raleigh (-1.9 percent), Sacramento and Tampa (each -1.5 percent), the Inland Empire (-1.2 percent) and Chicago, Charlotte and Las Vegas (each -0.8 percent).

Population decline is taking place in most urban areas, not just in the high-cost states with large urban centers such as California, New York and Illinois. According to a recent report by the Harvard Joint Center for Housing Studies, of the 68 counties in the U.S. with at least 1 million residents, 58 (85 percent) had net outflows in 2021, and 80 percent of counties in the outlying parts of these large metro areas had net inflows. Another interesting fact comes from occupancy rates, up in urban areas with a declining population such as New York, the Bay Area and Chicago, seemingly because the strong job market and rising wages helped individuals to form households by themselves.

The average asking rent in the SFR segment decreased as well, by $2 to $2,090, following a year-over-year increase of 9.5 percent, down 170 basis points from July. Of the 35 metros tracked by Yardi Matrix, 17 posted year-over-year rent growth of 10 percent or more as of August. Leading metros in rent growth were Washington, D.C. (40.1 percent) and Orlando (39.6 percent). Although nationally the occupancy rate decreased by 1 percent in July—the rate rose in only nine of the top 35 Yardi Matrix metros—with rent growth in the SFR sector moderating and financing costs for purchasing a home rising, demand for SFR housing will remain firm.