Multifamily Resilience Rises to the Top of Owner Concerns

Several striking videos from Hurricane Ian last September show storm surge rushing from the beach down Fort Myers, Fla., streets, drowning the first floors of apartment buildings and washing away smaller structures and cars. Deadly tornadoes savaged Kentucky in 2022, destroying apartments and lives. Raging January 2023 rains have prompted evacuations from Sacramento to Santa Barbara, putting 90 percent of California’s residents under flood watch. Resilience has become a priority for the multifamily industry. Is your community prepared for the next disaster? 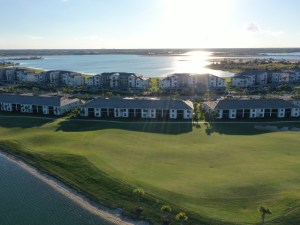 Apartments under construction at Babcock Ranch will benefit from the same resilience measures as the community’s condos, townhouses and single family residences. Image courtesy of Babcock Ranch

The American Institute of Architects has some thoughts on this topic, which it published in last July’s The State of Resiliency in the Built Environment report. Rose Grant, a licensed architect, contributed her unique perspective to the document. Grant served 22 years as program director for State Farm, as a Central Illinois-based consultant in disaster mitigation and hazards, and is a past chairperson of the AIA’s Disaster Assistant Committee.

“The biggest danger is water, whether flooding, storm surge, ice flows/dams, or tsunami,” Grant told MHN. “We know how to design for seismic risk, as well as for high winds, even tornadoes. Wildfires are also something we can design for.”

The choices for coping with water are to elevate the structure or not build near a water source but, as she pointed out: “Where will the water be 50 or 75 years from now due to sea level rise?”  One last hazard to add to your risk concerns, she suggested, is heat, a deadly resilience issue for occupants and employees.

Many tenants—and probably some building owners—assume that building codes will save their properties in a disaster. Not so. “The design parameters have been developed to ensure life safety—not property protection,” Grant retorted. Your building is considered successful if it remains intact long enough for occupants to safely evacuate, she  explained.  “There is no guarantee of its ability to remain in service for its intended purpose, or even to be able to be affordably repaired,” she added. That often means a post-disaster tear-down.

“Designing to above code will help ensure a higher probability of reduced (or no damage) to the building,” the architect suggested.  This means no interruption, less impact to occupants and employees, and better outcomes for a company’s reputation and stock. It also means avoiding material and contractor shortages and delays in getting permits after a disaster, she noted.

The International Existing Building Code is most in need of updating, Grant said. “In addition to looking at the document through a resilience lens, states and cities across the country need to adopt and enforce it,” she said. A priority should be roof integrity; whether in hurricane, wildfire, tornado or earthquake situations, “massive internal damage occurs when the roof is breached,” the architect warns.

Diane Jones Allen, principal landscape architect and professor/landscape architecture program director at the University of Texas at Arlington, knows that the land surrounding your buildings has a tremendous impact on their resilience. She has seen it first-hand in New Orleans, where her firm worked on post-Katrina multi-family projects. “The teams installed bio swales, rain gardens, dry creeks, planters, rain barrels and other stormwater facilities,” she said. The result was little to no flooding reported after the project was completed, and a more attractive site, she added. 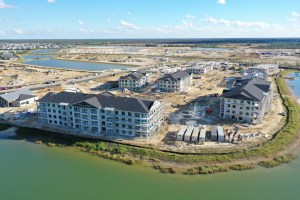 “Landscape can support a site’s ability to mitigate climactic and human impacts,” Allen noted. This includes the proper selection and maintenance of plant life, she shares. “There are misconceptions about the danger of trees and plants on a site,” she added. “Depending on conditions, tree roots hold soil together and prevent erosion, and plants often increase the absorption capacity of site.”

Trees should be trimmed or removed if they’re dead or unstable, but the landscape architect warns against eliminating them altogether. “Ridding a site of plant material in order to limit risks without proper knowledge can cause more harm than good, as bare sites have increased risk for flooding and erosion,” she explained. They also lack the ability to shade and cool the community, adding to heat risk.

Babcock Ranch in Southwest Florida kept the lessons from 2004’s Hurricane Charley in mind when the development was envisioned over the next two years. Its location 30 feet above sea level and far enough inland to escape storm surge is a huge part of its resilience. Sydney Kitson, chairman and CEO of Kitson & Partners, the town’s developer, overcame the “too far from the beach” criticisms, believing that resilience should be a core planning principle in his vision of a truly sustainable community. Hurricane Ian proved him right, as Babcock Ranch came through the 2022 Category 4 storm that crippled its region largely unscathed and with uninterrupted power.

An earlier storm also provided resilience training, recalled Trifecta Construction President Jennifer Languell, the community’s green building and sustainability advisor. “The lesson learned during Hurricane Irma was that hardening the infrastructure that transmit electricity is critical,” she said. Concrete poles replaced wooden versions. An 880-acre field of photovoltaic panels now sends electricity to a substation on property; it goes to the buildings within the community through underground lines. Batteries and a natural gas plant supplement solar. “Multiple sources of power provide resilience through redundancy,” Languell shared, adding, “The overlap is creating a system that provides energy independence.”

Reducing flood risk was another Babcock Ranch resilience goal. Sophisticated storm management systems were designed to provide alternate paths for water and elevated floor plans.  “If the lakes were to reach capacity, the water would intentionally flood the roads to protect the homes and businesses,” Languell explained.

Babcock Ranch’s residents and owners are big winners in these efforts. First, their properties’ water access and electrical power survived a major storm. Second, they didn’t pay extra for the features that ensured this success since prices for Babcock Ranch’s condos, townhouses, villas and single-family homes are competitive with local comparable properties, a spokesperson for the developer says. Third, demand for the community has soared since its storm success has been widely reported—October and November contracts reached record levels. Front-office staff report that first-time visitors repeatedly told the developer that resilience was what brought them to the property.

Collins noted that, while major events are often viewed as presenting the greatest resilience risks, what she called “secondary perils,” including floods, hail, tornadoes and wildfires, are increasingly contributing to losses. She pointed to building codes for wildfire risk as a special need, with mitigation needed both for an individual property and the surrounding community.

She recommends that executives look at a program called FORTIFIED Multifamily, developed by the Insurance Institute for Building and & Home Safety. “FORTIFIED is a nationally recognized building method based on more than 20 years of research and real-world testing,” she explained. The multifamily component is available for new and existing buildings and may help with policy discounts in some areas.

Collins also cites IBHS in describing these benefits to a multi-family developer in building to resilient standards: greatly reduced potential for property damage from natural disasters; protection of physical assets, including buildings, equipment, inventories and tenant improvements; increased likelihood of immediate reuse post-disaster, with the competitive advantages that provides; reduced environmental impact by limiting landfill use, and overall cost of recovery reduction.

“A 2018 study by the National Institute of Building Science shows that for every $1 spent on FORTIFIED Multifamily construction, approximately $4 is saved in disaster recovery expenses,” she quoted.

But there is a caveat.  “Along with adoption and enforcement of building codes, maintenance is also critically important to ensure the structural integrity and safety of multi-family housing,” she said. Failures of that kind were likely the cause of the 2021 Surfside, Fla., Champlain Towers collapse and 98 deaths, Collins noted. Though less common perhaps than loss of life and property associated with natural disasters, these resilience failures are largely preventable.

“I think the most important message here is don’t fight Mother Nature because you will lose,” cautioned Languell. That’s a good takeaway for all owners and managers wanting to protect their properties and people.