Rents increased by $2 to $1,426, while year-over-year growth remained at 3.6 percent, according to a Yardi Matrix survey of 127 markets. 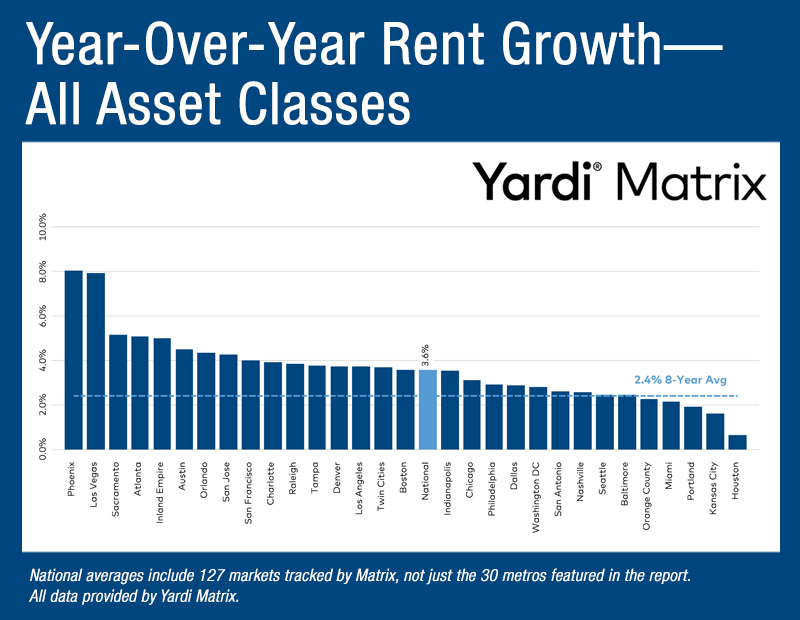 Multifamily rent growth has increased steadily since its lowest level of 2.2 percent in the fall of 2017. In February, rents increased by $2 to $1,426, with year-over-year growth steady at 3.6 percent. Compared to January’s 3.3 percent growth, rents rates gained 30 basis points.

Rent growth accelerated through the first stage of recovery, according to a Yardi Matrix survey of 127 markets, peaking in 2016 in the mid-5 percent range. The housing supply gap led to heightened demand, while the new supply of both single and multifamily units dropped by more than half following the financial crisis. Rents continued to then drop for more than a year. At that time, rents seemed to remain in the 2 percent range, but actually rebounded. Demand continues to be strong, as the unemployment dipped below 4 percent and wage growth accelerated to more than 3 percent.

When it comes to top performing metros, the Southwest continues to lead with top markets including Phoenix with an increase of 8 percent, Las Vegas rising 7.9 percent and Sacramento climbing 5.1 percent. This is due to strong population and job growth. Comparing Renter by Necessity and Lifestyle rent growths, the gap began to widen again, according to the report, reaching 120 basis points. However, on a national level, both asset types remain strong with increases of 2.9 percent and 4.1 percent, respectively.