By Robyn A
May 2, 2018
DevelopmentDigital Edition

Benefits like increased energy efficiency and cost savings, combined with heightened resident demand for sustainable features, are driving builders to think about sustainability.

Alongside the development boom that Marcus & Millichap estimates will add 335,000 new multifamily units to the nation’s inventory this year, another phenomenon is emerging. As developers recognize the benefits of sustainability for both their bottom line and their residents’ quality of life, they are increasingly incorporating sustainable building materials and methods into their projects. More than 1.5 million multifamily residential units were participating in the U.S. Green Building Council’s LEED program as of March 2018, and the organization expects that number to keep rising as new projects come online.

Healthy fundamentals, particularly strong occupancy and rising rents, are encouraging developers to build green, but other factors are also at work. “On one hand, there’s a request for sustainable building,” said Paula Cino, vice president for construction, development and land use policy at the National Multifamily Housing Council (NMHC). “Green building features are something that residents, as well as jurisdictions, are asking for from the builders and developers in their community.” 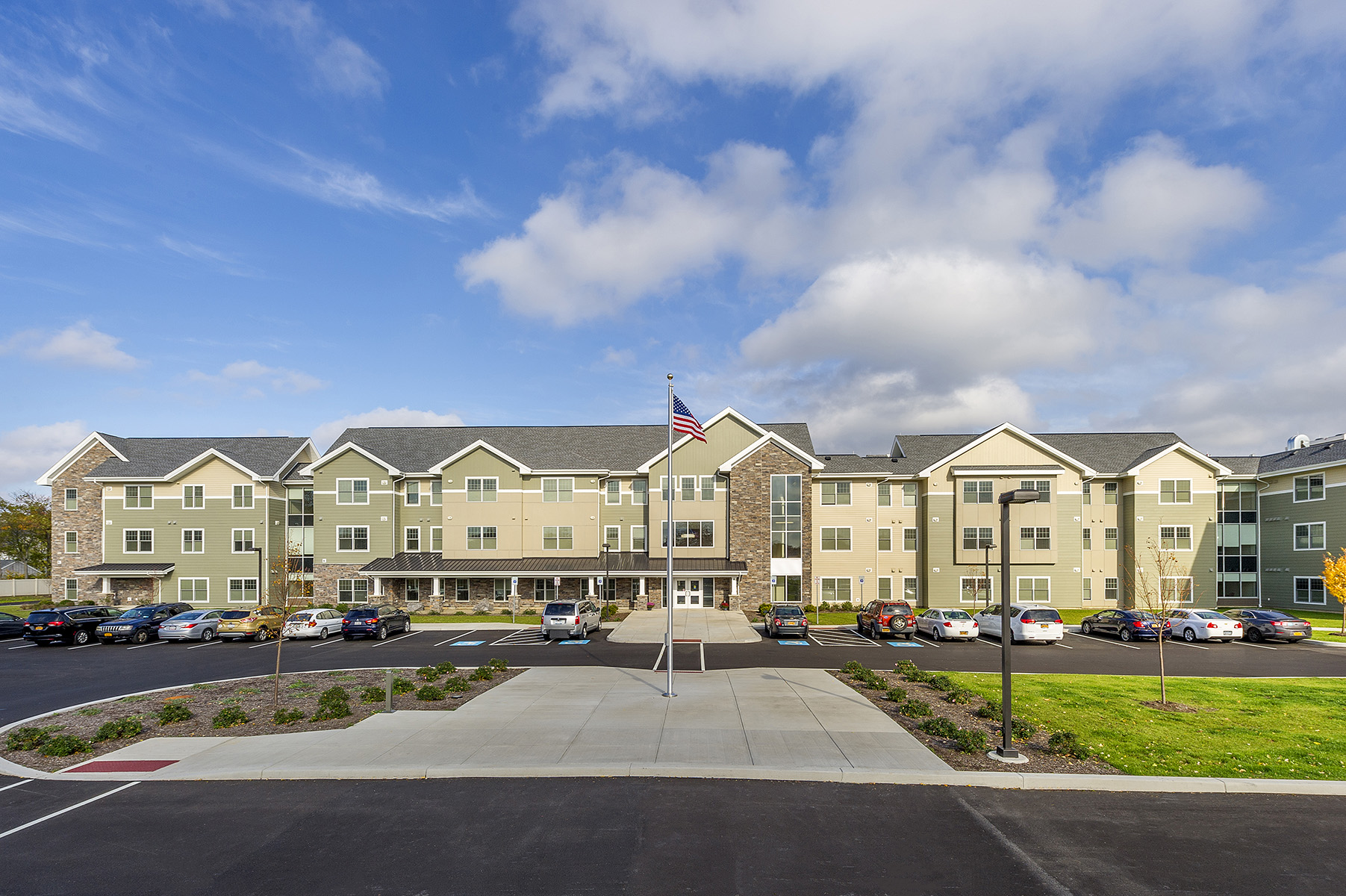 Developers are also recognizing “that there are some tangible advantages to green building, particularly when it comes to energy efficiency and water savings,” she added. “That can translate into some real dollars that go back into the owner/operator’s pocket for the life of that building.”

Studies back up Cino’s observation that renter demand for sustainable features is on the upswing, as well. According to the 2017 NMHC/Kingsley Associates Renter Preferences Report, 65 percent of respondents said they would be interested in a community with sustainability/green initiatives, and 78 percent said they’d be interested in a community with Energy Star-certified appliances.

But respondents also recognized that living in sustainable communities will likely come at a price, noting that they would expect renters in their area to pay $27.27 more per month for an apartment with sustainability or green initiatives, and a $29.82 premium for an apartment with Energy Star-certified appliances.

“There has been a lot of conversation about whether or not there is a rent premium for green building—we’ve heard it both ways anecdotally,” Cino said. “There are developers that say they certainly can get greater rents for a green building. But when we look at those case studies, we often find that those buildings are already going to get a premium because they are a marquee project or in a location commanding higher rent.”

Still, building sustainably ultimately helps landlords cut the costs of energy and water usage, which improves net operating income. That raises an asset’s valuation and improves the return on investment from green building. Green buildings can have utility savings of 20 to 50 percent over traditional buildings, reported Lauren Zullo, director of sustainability for Jonathan Rose Cos. 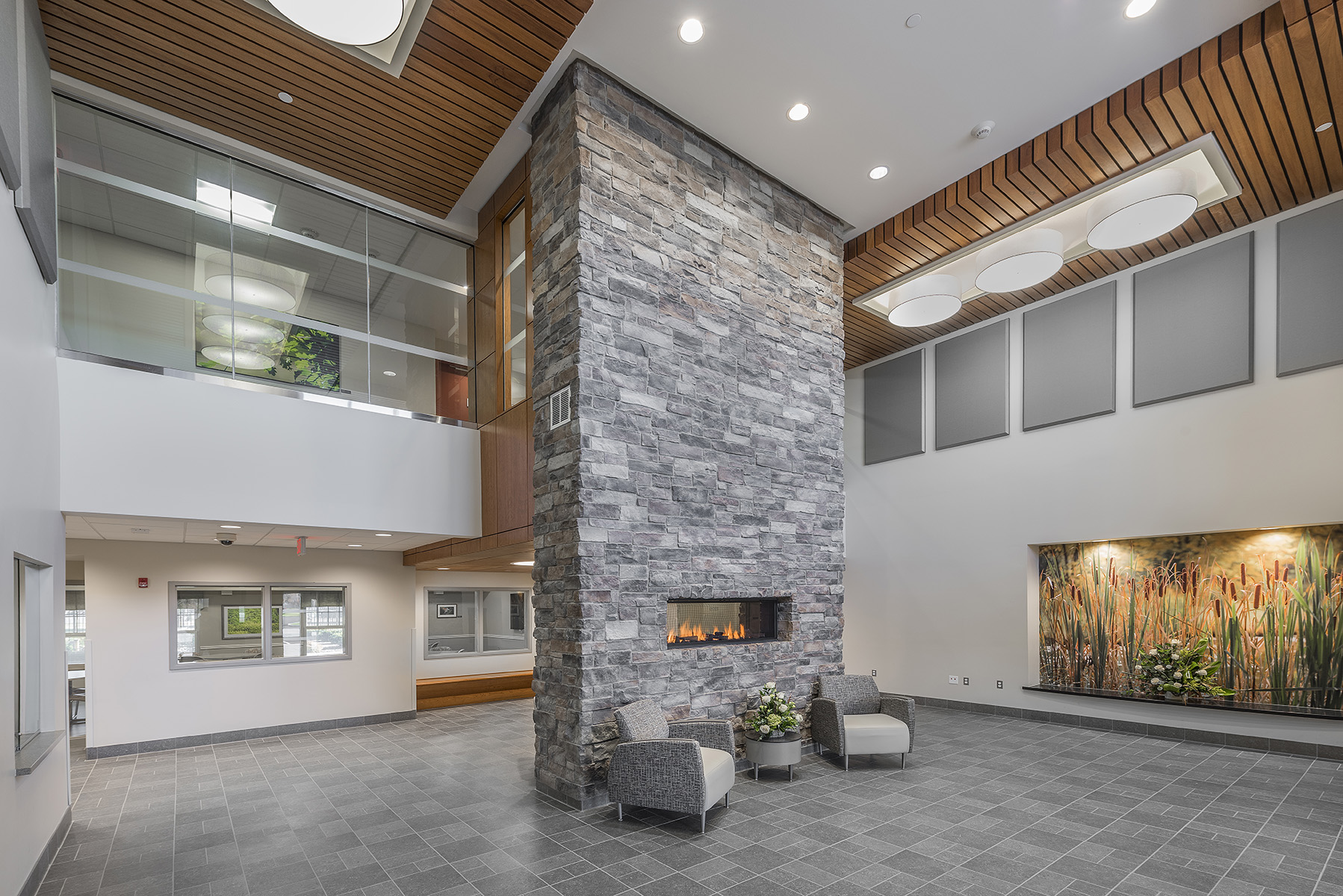 Many jurisdictions are also encouraging sustainable development through economic incentives, particularly for affordable housing. In late 2016, SWBR, a Rochester, N.Y.-based architecture and design firm, completed DePaul Ebenezer Square, a $16.5 million, 100-unit apartment community in West Seneca, N.Y. The project, a blend of affordable and supportive housing, received LEED for Homes Platinum certification and incorporates a 150-kilowatt solar array that is expected to generate 75 percent of the building’s electricity. The developer received $300,000 from the New York State Energy Research and Development Authority (NYSERDA) and $184,050 in New York State Solar Tax Credits.

“This is not just green design,” said Joe Gibbons, an SWBR principal. “It’s important to the people we talk to—investors, tax credit professionals and local municipalities. Since this project was finished and received LEED for Homes Platinum, it means something when I talk to other municipalities. Ebenezer is a linchpin for DePaul to show others that LEED for Homes can be done and it makes a difference.”

To further reduce costs and improve energy efficiency, developers of sustainable multifamily properties are incorporating new technologies and methods. Many of these techniques have been used successfully in Europe or Canada and are spreading to the United States as building codes evolve. 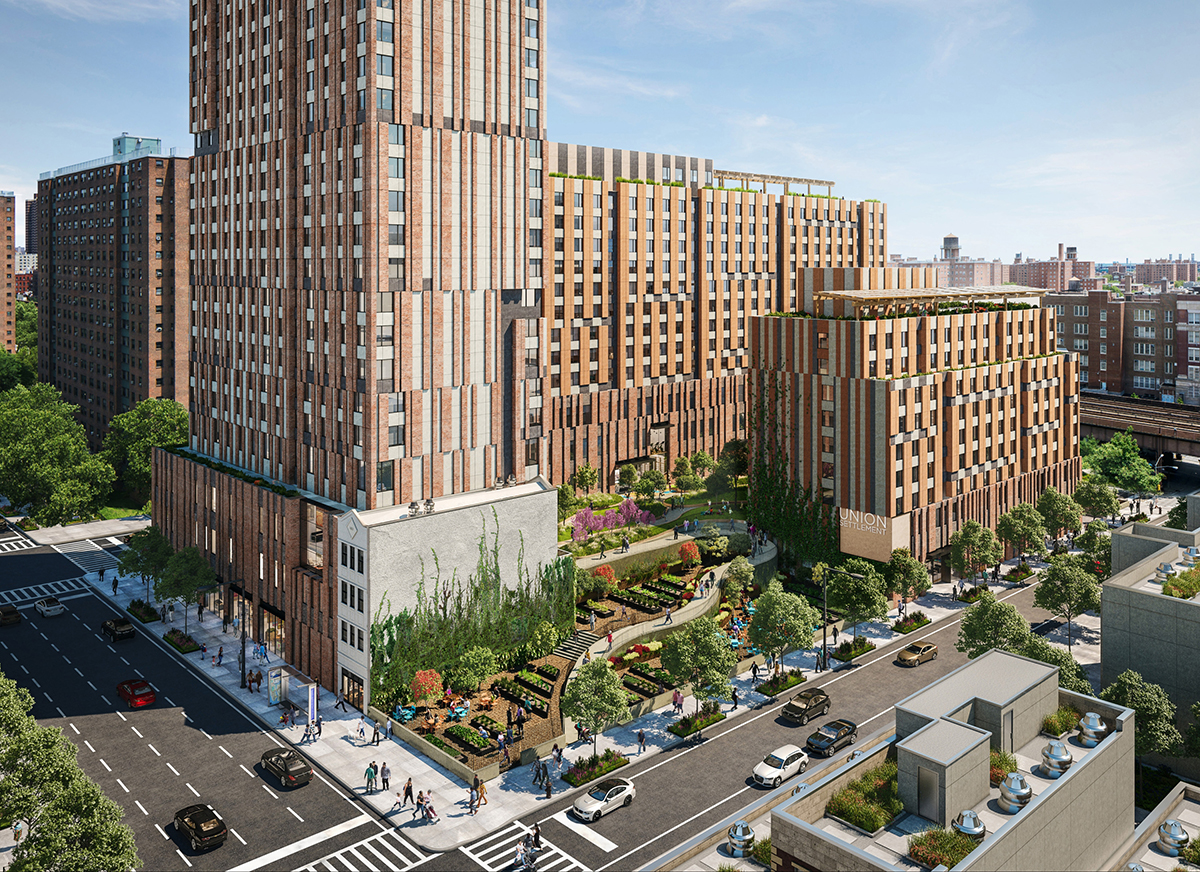 Sendero Verde, a 655-unit, mixed-use project under development in New York’s Harlem neighborhood by Jonathan Rose Cos. and L+M Development Partners, will be certified to Passive House standards.

“In cities like New York and D.C., they’re looking for sustainable buildings,” Zullo noted. “They are really pushing the developer community to build more sustainably.” She added that when sustainability goals are integrated early into design, construction hard costs should increase no more than 10 percent—and in many cases are right on par with the cost of conventional construction. 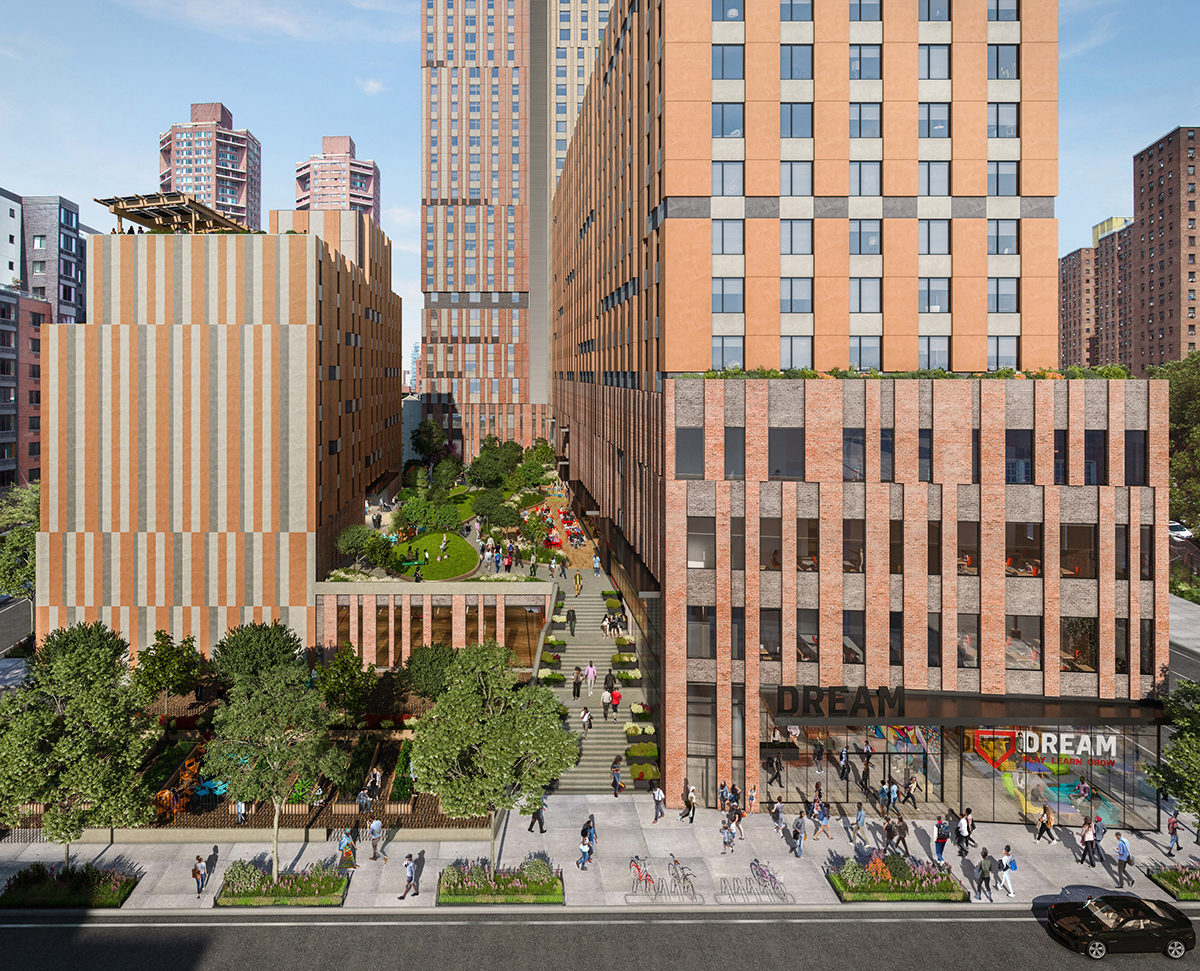 Dan Morrison, a spokesperson for the Chicago-based Passive House Institute U.S., noted that building to Passive House standards entails a learning curve. Builders with experience can meet the standards at a cost just 2 percent higher than conventional construction methods, while less seasoned developers can expect a 5 percent premium.

However, he asserted that the payback on Passive House construction is well worth the investment. “Our experience has been that multifamily and commercial buildings built to PHIUS+ standards use about 86 percent less heating energy and 46 percent less cooling energy, depending on climate zone,” he said.

Manufacturers are responding to the demand of developers and contractors to provide transparency about their products and ingredients, Zullo reported. Even retailers are starting to jump on the transparency bandwagon. In late 2017, Home Depot announced its intention to phase out certain chemicals from the paints, flooring and insulation it sells.

Related development trends include the use of green roofs, which contain live plants, and blue roofs, which retain water and use it to cool the building, Zinder said.

Another time-honored sustainable building material that is gaining ground in multifamily construction is wood.  “Wood construction offers an environmentally positive option, but it also tends to be more cost effective,” asserted Jennifer Cover, president & CEO of WoodWorks, an organization dedicated to technical assistance and education related to timber construction. “Wood buildings have to meet the same requirements for safety and performance as buildings made from other materials.” Moreover, wood promotes flexibility of design and architectural expression, she added. 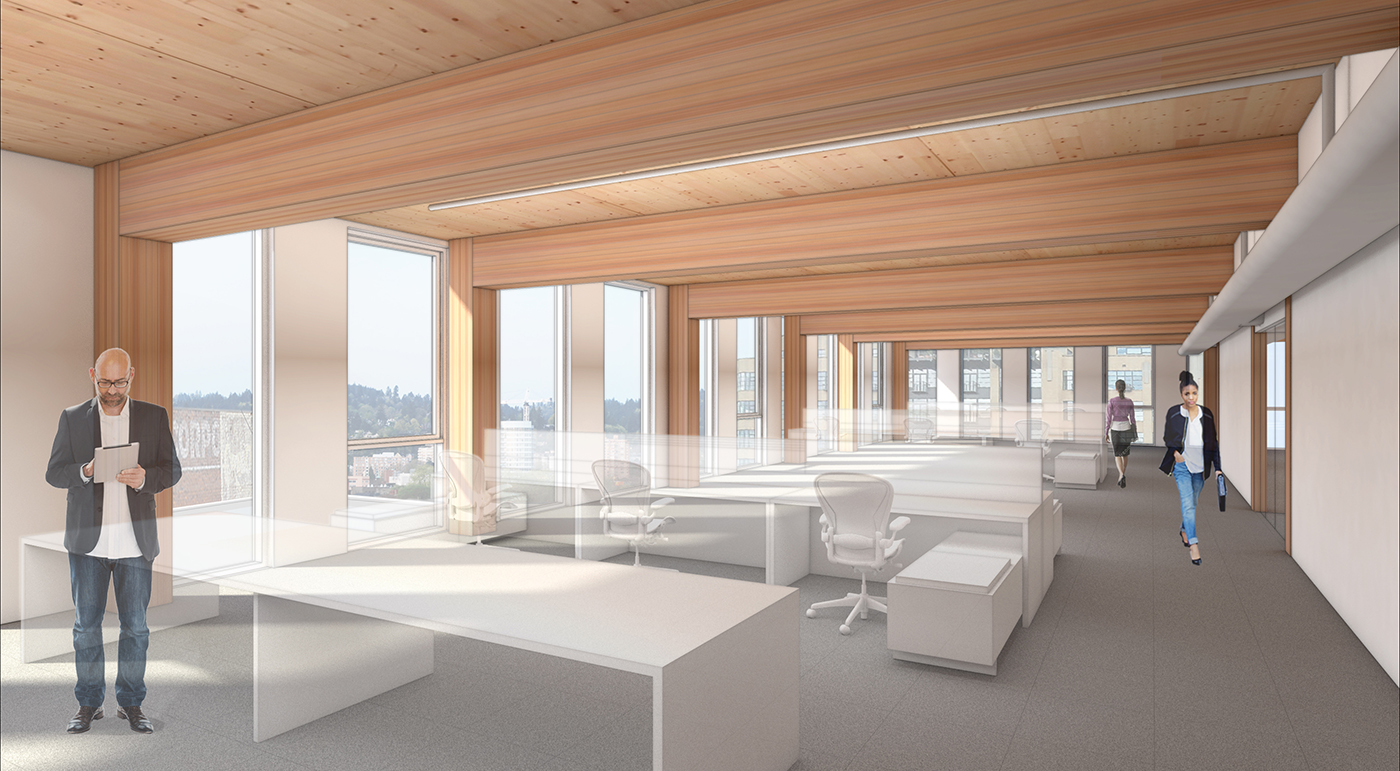 The cost of wood-frame construction on a midrise building is typically less than concrete and steel. International Code Council data estimates the average cost of a Type IIIA wood building is $129.52, $20.58 per square foot less than a comparable Type IIA concrete-and-steel structure.

Wood construction also brings the advantage of speed, saving developers time and money and allowing them to bring new product to market faster. Five- and six-story multifamily projects are increasing in number, now that Type IIIA construction is better understood; in the past, wood buildings were often limited to three or four stories, even where codes permitted greater height. The increasing use of mass timber—which has high strength, stability and environmental performance—is allowing projects to rise still higher. One that has attracted national attention is Framework, a planned 12-story project in Portland, Ore. Billed as the nation’s first all-wood high-rise, Framework will rise 148 feet above street level upon completion in late 2019. The project’s sponsors, The Framework Project LLC and Home Forward, Multnomah County’s housing authority, plan 60 affordable units, 39,000 square feet of office space and 9,000 square feet of retail. 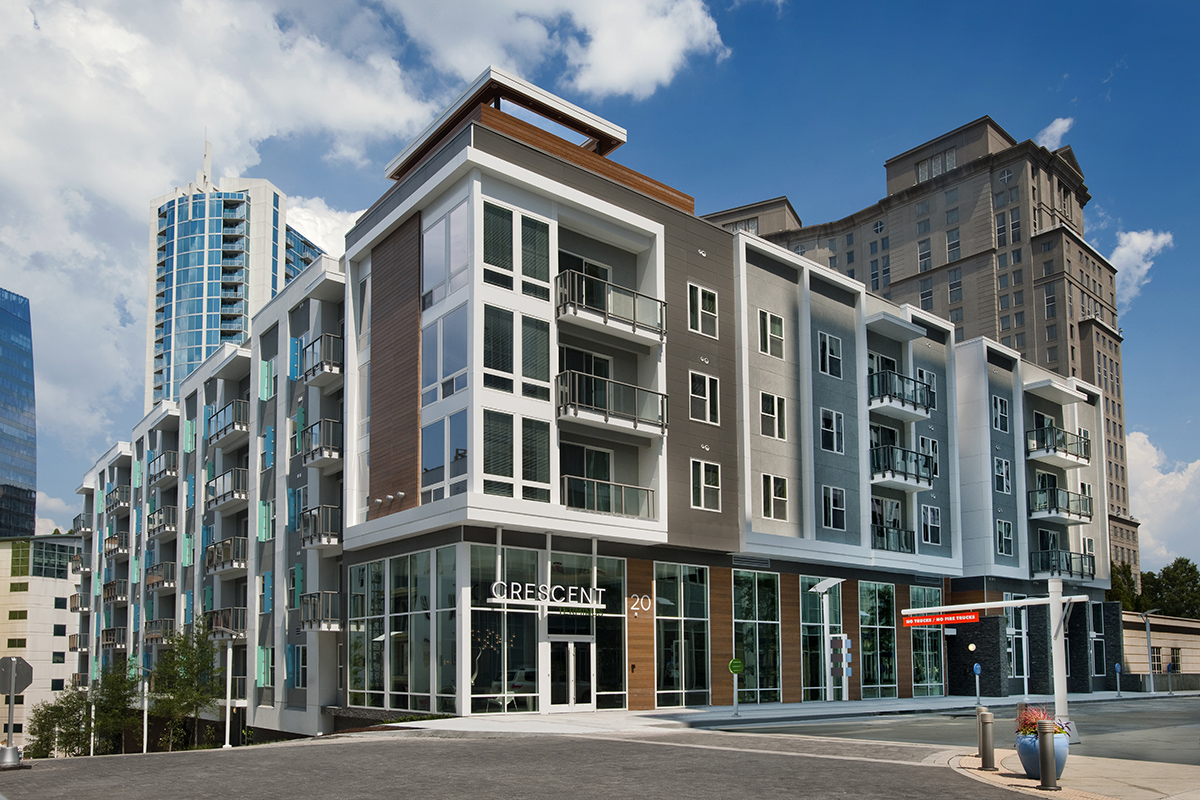 Crescent Terminus, a three-building luxury apartment community in the Buckhead section of Atlanta, was completed by Crescent Communities in 2014 and used wood-frame construction.

The benefits of new strategies often emerge over time, and such has been the experience of Crescent Communities in its use of timber construction at Crescent Terminus, a luxury property in Atlanta’s Buckhead submarket. Completed in 2014, the 355-unit, three-building community features dimension lumber, laminated veneer lumber, laminated strand lumber, metal-plate-connected roof and floor trusses, and wood structural panel sheathing. The wood components have reduced the building’s carbon footprint, keeping 9,196 metric tons of carbon dioxide out of the atmosphere—the equivalent of taking 2,583 cars off the road for a year—and saving enough energy to operate a single-family home for 1,149 years, according to WoodWorks.

“There are a lot of reasons building designers choose wood for multifamily buildings—cost, versatility, ease of construction, the fact that wood buildings meet the same safety and performance requirements as other materials,” Cover said. “Sustainability doesn’t always drive the decision to use wood, but anyone who chooses wood gets the benefit of using a renewable, carbon-friendly and sustainable material.”