Boasting the third tallest skyline in the U.S., the city features 225 multifamily towers rising more than 10 stories high. Here are the tallest ones, including several still under construction.

Over the past years, Miami’s skyline has become one of the fastest growing in the nation. The city’s ‘high-rise’ history started in 1925 with the Freedom Tower, Miami’s first skyscraper. Currently, there are 225 residential towers above 10 floors in the metro, according to Yardi Matrix data. This list includes the tallest ones. 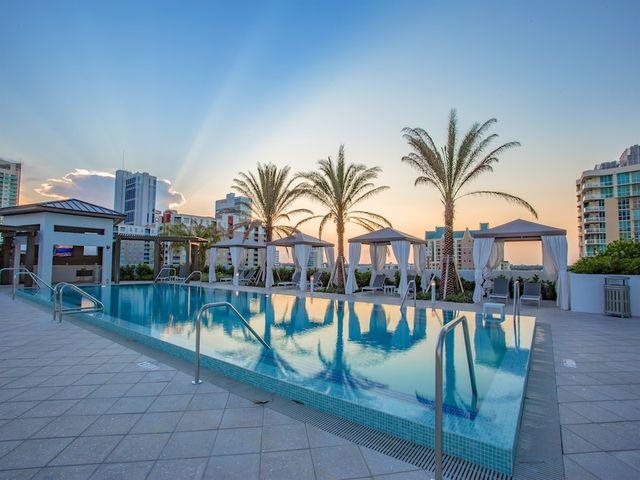 Amaray Las Olas, Stiles Development’s 30-story high-rise, is one of metro Miami’s tallest multifamily towers. Located in Fort Lauderdale at 215 SE 8th Ave., the community totals 285,329 square feet and consists of 254 units. The one-, two- and three-bedroom residences as well as penthouses offer 26 unique designs and include glass-tiled kitchens, hardwood great rooms and wrap-around balconies with expansive views. Greystar Management manages Amaray Las Olas, and as of May 2017, the occupancy rate was 99.6 percent.

The 31-story waterfront property is located at 425 NE 22nd St. in the Edgewood submarket of Miami, just minutes away from the city’s wide array of attractions, including beaches, the art and entertainment district, central business district, the financial district and more. Owned by Melo Development, the 286-foot-tall, 258-unit condo tower offers one-, two- and three-bedroom options, averaging 1,172 square feet. Community amenities include a fitness center, swimming pool, 470 parking spaces and over five floors of retail. Rents at the property equate to $2,071 per month.

Flagler on the River

8. Flagler on the River

Among Downtown Miami’s tallest residential towers, the 300-unit Flagler on the River was built in 2014 and encompasses one-, two- and three-bedroom units. Amenities at the 32-floor, 312-foot-tall property include business and fitness center, clubhouse, swimming pool and spa and covered parking. The high-rise also features two floors of retail and office space. Melo Development owns and operates the 99.7-percent-leased asset, with rents averaging $1,931.

The 513-unit, 338-foot-tall luxury community is located in Miami Beach and features studios, one- to three-bedroom apartments as well as penthouses. The tower consists of 32 stories and is 93.8 percent occupied. Property amenities include a business and fitness center, sport courts, swimming pool, covered parking and 2,500 square feet of retail. Owned and managed by Aimco, rents at the Class A+ community average $2,757 per month.

Owned by Aimco, the 368-foot-tall residential high-rise is located in Miami’s Edgewater submarket. The luxury tower comprises studios and one to three-bedroom units, equipped with above-standard ceiling heights, washer and dryers and more. Completed in 2000, the community features a wide array of amenities, including a fitness center, basketball court, swimming pool and two spas, laundry facilities and 540 fully covered parking spaces. Currently, the property is 97 percent occupied and average monthly rents rest at $1,553 for studios and $2,894 for two-bedroom apartments. 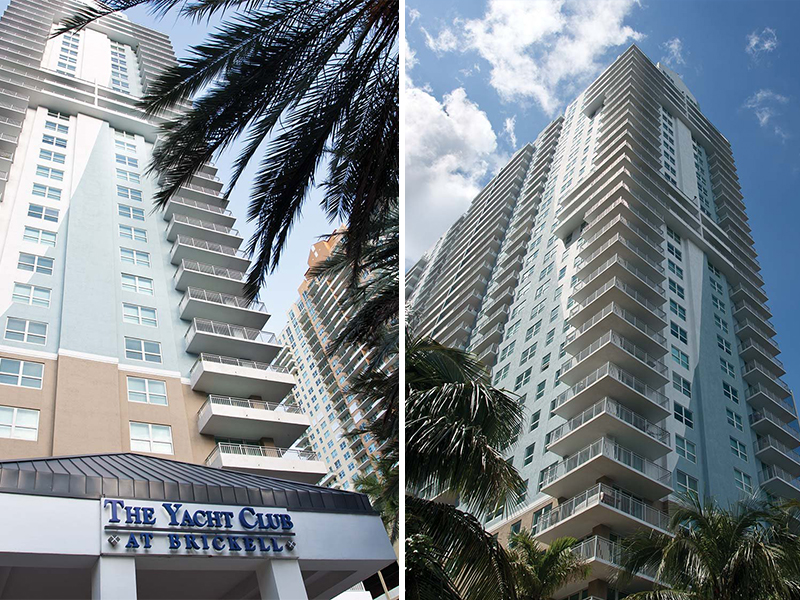 Aimco’s 380-foot-tall Yacht Club at Brickell lands on the 5th spot as one of the metro’s tallest multifamily buildings. Built in 1998, the Class A, 36-story property is located within Miami’s Brickell submarket, at 1111 Brickell Bay Drive. The luxury community features one- to three-bedroom unit options, averaging 1,197 square feet and $2,484 per month. Amenities include a business and fitness center, clubhouse, tennis court, playground, swimming pool and spa, laundry facilities and full covered parking. Aimco is also the manager of The Yacht Club and as of May 2017, the residential tower was 96.4 percent occupied. 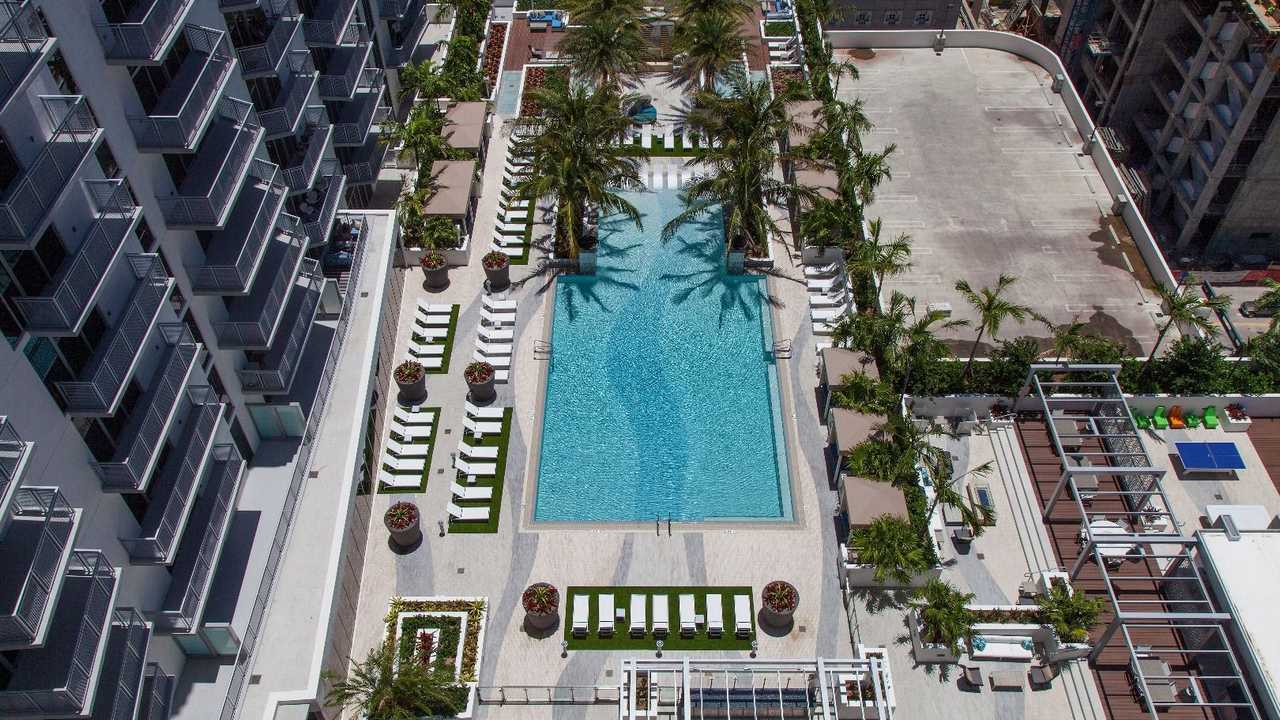 Monarc at Met 3 aerial view of the pool

Situated on a 1.8-acre site at 201 SE 2nd Ave. in Downtown Miami, the 32-story tower features studios, one-, two- and three-bedroom options as well as penthouses. Penthouse rents can go up as high as $4,578 per month, while studio rents rest at $2,458. The 381-foot-tall Monarc at Met 3 was recently completed—in November 2016—and is currently 62.6% leased. In 2014, a $90 million construction loan was provided by a private lender for the developer, ZOM. The community also features corporate housing units and a rooftop terrace and pool.

Boasting 40 stories, the 413-foot-tall community is owned and managed by EPSA of America, and is located within the city’s Brickell district. Built in 2005, the luxury tower encompasses studios and one- to three-bedroom units, equipped with complete kitchen appliance package, granite countertops, private terraces, marble flooring and walk-in closets. One Broadway features 15,000 square feet of retail space, full covered parking, swimming pool, clubhouse and more. In 2014, the property became subject to a $145 million loan, held by Iberiabank. 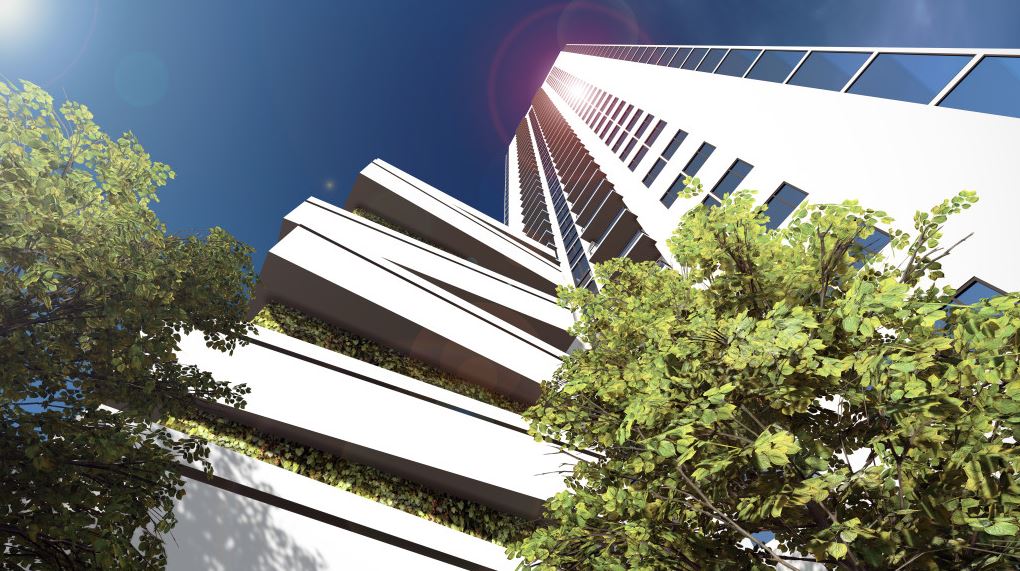 Among Miami’s tallest buildings overall, the iconic Melody Tower is located in downtown Miami, within the Arts and Entertainment district, at 245 NE 14th St. Melo Development began construction on the 36-story, 467-foot-tall tower in 2014, securing a construction loan with Totalbank in the amount of $67 million. The luxury high-rise was completed in 2016 and is currently 99.8 percent leased. It features one-, two- and three-bedroom residences, 8,500 square feet of retail as well as a rooftop terrace and pool. Monthly rent for a three-bedroom, two-bath apartment equates to $2,366 and $1,800 for a one-bedroom option.

Topping this list is the 543-foot-tall, 56-story Opera Tower, located at 1750 North Bayshore Drive in Miami’s Edgewater – Wynwood submarket. Of the total 635 units, 488 are held by individual owners and 147 remain as rentals. The rental portion is owned and managed by Florida East Coast Realty and features studios and one- and two-bedroom apartments, averaging 911-square-feet. As of May, the rental community was 98 percent occupied, with monthly rents averaging $2,152. Amenities include a fitness center, clubhouse, swimming pool and spa and full covered parking. The waterfront tower is just minutes away from Midtown and the Arts and Entertainment District. 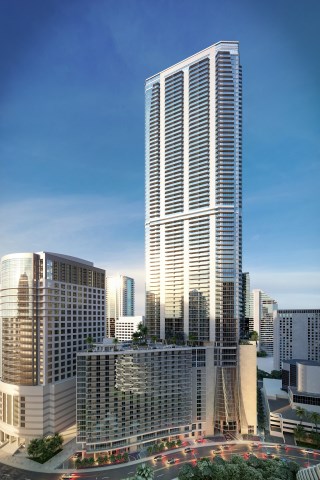 Currently under construction, the 868-foot-tall Panorama Tower will become both Miami and Florida’s tallest completed residential building as soon as the project is finalized. Apart from multifamily units, the tower will include retail, hotel and office space, as well. Other notable Miami-area high-rise projects under construction are: the upcoming 50-story Solitair residential tower in Brickell Miami; the 391-unit Avant at Met Square in Downtown Miami; the 455-foot-tall Icon Las Olas in Ft. Lauderdale and the 43-story Miami Worldcenter 7th Street in Downtown Miami.

Images courtesy of the property websites