Flagler on the River, a rental tower currently under development by the Melo Group, recently topped-off construction at 32 stories. 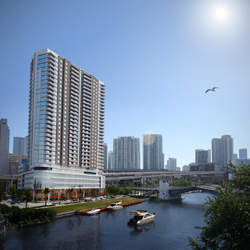 Miami—Flagler on the River, a rental tower currently under development by the Melo Group, recently topped-off construction at 32 stories. When complete this June, the 250-unit property—which is just outside of downtown Miami at 340 W. Flagler St. —will include residential, office and two street-level floors of retail and restaurant space facing the river.

“Flagler on the River sits between two of South Florida’s largest employment hubs, Miami’s Brickell Financial District and Miami’s Health/Civic District, both are home to numerous workers during the day,” Melo Group principal Carlos Melos tells MHN. “Many of those professionals want to live near work, but rental options had been extremely limited in Miami’s urban core. The demand among attorneys, bankers, doctors, nurses and all of the professionals working downtown has been untapped for a long time.”

During the recession, Melo Group was to buy land in the area at a price that would support building a rental project a few years later. “Good timing is what helped us build a rental project that makes economic sense,” Melos says. “Once land values along the river skyrocket again, as it happened in the last condo boom, building rentals for the area’s workers won’t be feasible anymore.”

Also, Melo is in talks with two popular Miami restaurants to open at Flagler on the River, though the company isn’t saying which ones just yet. The neighborhood is already home to a number of popular Miami River eateries, such as the new Mediterranean brasserie Seasalt and Pepper, and Garcia’s Seafood Grille.