While year-over-year rent growth dipped slightly in August, fundamentals remain strong in many metros across the country. 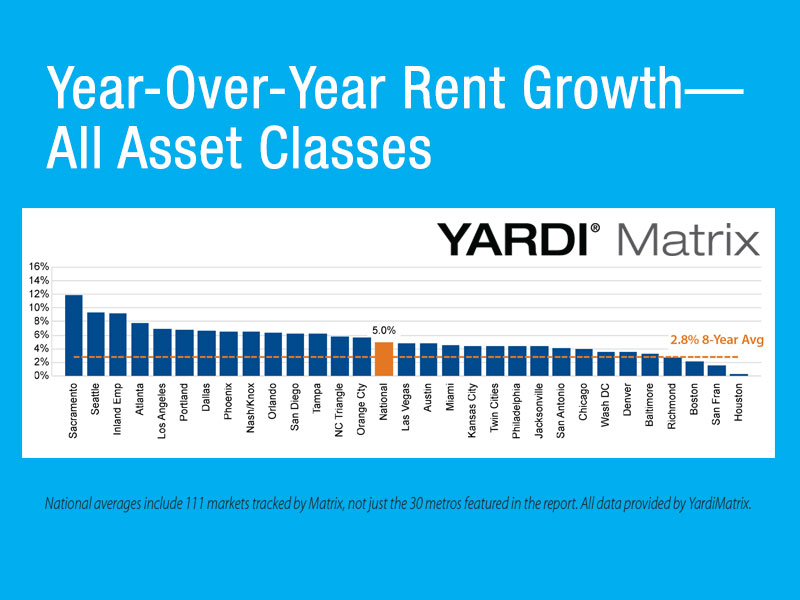 It seems that the long-awaited deceleration in rent growth is upon us, according to the most recent Matrix Monthly report from Yardi Matrix. While average U.S. rents increased by $3 in August, rents decreased 50 basis points from July, 110 basis points from April, and 170 from October. According to Matrix’s monthly survey of 120 markets, average rents in August hit the eighth consecutive monthly record of $1,220.

While it appears that overall rent growth is slowing down, fundamentals in markets across most of the country hold strong. Occupancy rates and job growth have slowed slightly in comparison to recent peaks but still remain high. Compared to half of 2015 and early 2016, the number of metros making sizable year-over-year gains has declined, but 18 of the top 30 metros have maintained growth between 4 and 7 percent during the past year. Leaders in rent increases were Sacramento with 11.9 percent, Seattle with 9.3 percent, and the Inland Empire with 9.2 percent.

The anticipated market deceleration has been focused mostly in tech-centric metros, which are suffering due to less demand and more affordability concerns despite growing supply. San Francisco, a recent top earner in rent growth, has decreased to 1.6 percent year-over-year as of August. Denver, which logged a remarkable 11 percent year-over-year figure in 2015, has fallen to 3.5 percent. Other markets are seeing slight slowdowns as well, including Austin, which increased 4.8 percent year-over-year through August compared to its 6.9 percent in 2015, and Boston, which rose 2.2 percent compared to 2015’s 5.2. While the deceleration in these markets is less pronounced than that in San Francisco, both tech-led markets declined by about four percentage points in recent months.

In the rest of the country, rent growth generally remains strong. In metros in the Sun Belt, Southwest and Southern California, rents are growing between 5 and 8 percent. According to the report, fundamentals in those areas remain so solid that “those markets could see continued gains above historical growth rates.” Even traditionally lower performers like Philadelphia, Washington, D.C., and Baltimore in the East and Kansas City and Chicago in the Midwest are enjoying 3 to 5 percent growth, which is progress by historical standards for those areas.

All in all, the deceleration seen in August is within the expected moderation, the report assures. Matrix forecasted growth of 4.5 percent for 2016, so August’s numbers could be seen as an improvement over most of the industry’s predictions.