MARKET SNAPSHOT: Seattle on a High Due to Low Unemployment and Vacancies

Seattle’s recent emergence as one of the most intriguing real estate markets in the United States is in no small measure the result of the influence of major corporate presences such as Microsoft and Amazon.

Seattle’s recent emergence as one of the most intriguing real estate markets in the United States is in no small measure the result of the influence of major corporate presences such as Microsoft and Amazon. Vulcan Real Estate, one of the most active developers in the local market, and the undertakings of Amazon.com in the city’s core have bolstered an already strengthening market with neighborhoods such as South Lake Union, Belltown and Capitol Hill at the forefront.

“Huge investment in the South Lake Union neighborhood by developers and tenants alike has substantially contributed to the emergence of SLU as a major micro-market within Seattle’s CBD,” Dylan Simon, Colliers International, tells MHN. “[Recently] it was announced that Vulcan Real Estate won the NAIOP 2013 Developer of the Year Award, largely for developing 23 buildings with 4.8 million square feet of space in this neighborhood alone. The influence of Amazon.com locating an urban campus in the heart of SLU and absorbing north of 2.7 million square feet is a major driver.”

The city’s figures in terms of sales reflect a greater resilience on the owner’s part with the sales volume in the Puget Sound area considerably lower than recent years, according to Colliers International. This is most likely due to the fact that assets are now producing higher rates of income owed to rising rents, dropping vacancies and low interest rates. In fact, after a prolific 2012 in terms of sales, the counties of King, Pierce and Snohomish have experienced a considerable compression of sales volumes.

The job market has had a serious influence on the Seattle area, with the city far outpacing national and state values. According to the U.S. Bureau of Labor, the city’s rate of unemployment stood at 4 percent, a lower rate than the one for the Seattle-Bellevue-Everett MSA, which was of 5.3 percent as of June 2013, and a far cry from Washington’s overall value of 6.8 percent. The national rate stood even further, at 7.1 percent. Colliers noted that Puget Sound drove 73 percent of Washington job absorption with new places being added in technology, manufacturing and construction.

Seattle’s average vacancy value is currently set at 2.9 percent, and per-unit prices are currently valued at approximately $243,462, an increase of 22 percent compared to 2012, according to figures from the Dupre and Scott April/June 2013 Investment report quoted by Colliers. 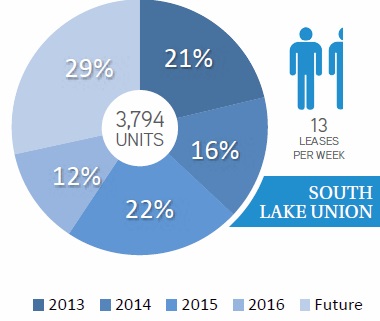 There are 23,192 units in the development pipeline for urban Seattle, which counts for 77 percent of the 30,116 units in the pipeline for the entire King County. According to the figures for each individual neighborhood, Downtown, Capitol Hill and South Lake Union are the hotspots for development and leasing. In each of these neighborhoods, there are more than 3,500 units in various stages of development, and absorption stands at over 13 new leases each week.

“The question of overbuilding in Seattle is best looked at through a lens of where and when,” Simon explains. “Given strong demand drivers and a focus on urbanization in Seattle, close-in micro-markets such as Capitol Hill, the CBD and South Lake Union are somewhat resilient to large increases in supply.”

South Lake Union is a particular area of interest as the neighborhood has seen its profile grow over the past decade. What was once an area featuring barely any market-rate multifamily projects is now one of the most high-profile areas in Seattle, thriving from the influence of Amazon.com’s Denny Triangle project and overall interest in the tech sector. Now, with projects such as Tarragon’s Boxcar, Greystar’s new apartment project, the Rollins Street Flats and projects spearheaded by Holland Residential, SLU has grown into an area that could even end up discussing overdevelopment in the near future. Its project pipeline is set to see the neighborhood become one of the most consistent providers of housing stock for the next four years, only being outpaced by Downtown Seattle’s frantic rate of development planned for 2017 and onward.