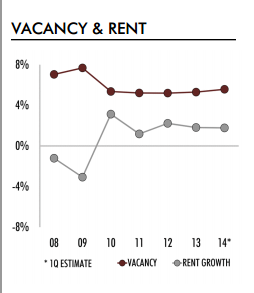 Raleigh-Durham, N.C.—Apartment inventory in the Raleigh-Durham, N.C., area expanded by 1,020 units during Q1 2014, a slight decrease from the last quarter of 2013, when 1,340 units were delivered. According to research data from Hendricks-Berkadia, the Hillsborough submarket saw the greatest number of additions, with 250 new units.

Marketwide, the completions surpassed the area’s demand for rental units, pushing up vacancy 30 basis points to 5.6 percent. The average asking rent reached $891 per month in March, increasing by 1.8 percent year-over-year and by 0.6 percent since the end of last year. Meanwhile, multifamily permitting activity climbed 15 percent since the beginning of the year. Developers submitted permits for 7,540 annualized units, which accounts for a 2 percent drop from the same period in 2013. The median price for single-family homes in the Raleigh-Cary area reached $205,350 in March, a 12 percent increase year-over-year, while the median home price advanced 8 percent to $199,000 in Durham-Chapel Hill.

As for the area’s employment trends, during the first half of 2014 Raleigh-Durham companies created 14,400 jobs, a 1.8 percent year-over-year increase. Supported by the growth of technology firms, the 2014 mid-year employment rate outpaced the 1.6 percent increase of the previous year.

Government employment led the metropolitan area with 3,900 new positions created since March 2013, followed by the professional and business services industry, with 3,300 additions. One of the most notable employers is HCL Technologies, a company that created 200 new call center jobs within the same period and plans to add more than 1,200 jobs in Cary by 2018. Following the same trend, software company Red Hat Inc. announced it would hire at least 600 employees, while MetLife plans to employ 1,200 workers at its new technology hub currently under construction in Cary.

The Triangle office market continued to grow strong during the second quarter of 2014, according to research data from Avison Young.

The Raleigh-Durham economy is on the upswing as technology companies continue to grow, generating an intense construction activity in the area. As such, the Raleigh-Durham office market climbed from a mere 290,000 square feet of space underway in mid-2013 to approximately 1.5 million square feet in the pipeline by the second half of 2014. More than 75 percent of this year’s additions were preleased at the time of construction.

The I-40/RTP submarket continued to experience the strongest activity, with a positive net absorption of approximately 230,000 square feet. The completion of the 206,000-square-foot Perimeter Two office building accounted for most of the absorption and, by the time it was delivered, the project was 97 percent preleased. Compliance Implementation Services, Fujifilm, Medical Systems, Maxpoint Interactive and SciQuest are among the property’s tenants.

The West Raleigh submarket also experienced a significant absorption of office space with the relocation of LexisNexis into 120,000 square feet of space at 1901 Varsity Drive. The property had been vacant since Red Hat’s move to downtown Raleigh.

Demand for office space is expected to continue to grow through the remainder of the year.

Lease rates are also estimated to maintain a positive trend through the end of 2014. During the first half of the year, average Class A asking rates for office space in the Triangle increased by 3 percent. This growth is likely to continue as demand outpaces supply, and is expected to deepen in 2015, when new deliveries will be offered at a higher price point.

The Raleigh-Durham industrial market continued to remain tight during this year’s second quarter, according to the most recent data available from Cushman & Wakefield.

The market’s overall net absorption of warehouse space over Q2 2014 was of 217,790 square feet, while leasing activity reached 363,406 square feet. During the same period, asking rents have grown by 2 percent year-over-year across all warehouse classes.

Class A inventory posted 98,517 square feet of positive absorption, pushing down vacancy to 8.7 percent. Rental rates within the same class have reached $4.57 per square foot, increasing by 4.8 percent since Q2 2013. With a total net absorption of 235,007 square feet, the region’s largest institutional submarket, RTP/I-40, reached a vacancy rate of 4.7 percent during Q2 2014, the lowest since Q1 2008. Meanwhile, RTP’s overall rental rates saw an overall year-over-year increase of 7.3 percent.

Sales activity in the Raleigh-Durham industrial market during the first half of 2014 was exceptionally strong. Over 3.2 million square feet have been traded since the first half of 2013, totaling more than $175 million in transaction volume (22 deals), but record-breaking deals are expected to close towards the end of the year, which is typically more active in terms of transaction volume.

The region’s industrial market is expected to see a strong overall performance this year, and attract new construction projects in the foreseeable future.