As we embark on 2014, it seems that the “status quo” of Los Angeles’ apartment market that we’ve seen over the past couple of years will continue. 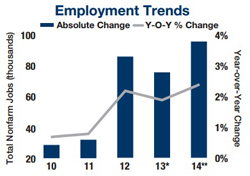 Los Angeles—As we embark on 2014, it seems that the “status quo” of Los Angeles’ apartment market that we’ve seen over the past couple of years will continue. With jobs set to pop up around L.A. County in all major sectors, and construction providing a steady influx of new units for the city’s apartment stock, the city will continue its streak of stabilization that began in 2012.

Los Angeles is the second largest city in the United States, and therefore in terms of growth, no major changes will be seen by the end of the year, bearing in mind that the market is still reeling from the major shock it experienced seven years ago. 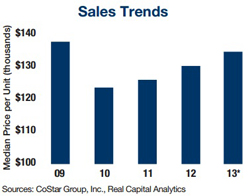 Now that the job market is vastly improving, with payroll levels set to reach pre-recession highs, vacancy will maintain its relatively tight average values. 2014 is set to see the addition of 94,900 new jobs, while last year saw 74,800 jobs brought to the county. The increase in lower-paying jobs will also draw attention to the Class B/C apartment market throughout metro L.A. However, when factoring in the pace of construction, the real estate data provider concludes that rent rates will merely keep growth at the inflationary rate.

According to Marcus & Millichap Real Estate Investment Services’ L.A. Market Outlook for 2014, average rents will experience a slight uptick in the county, with the year set to see the median value hit $1,726 per month, a 1.2 percent hike.

Los Angeles county is ranked 15th on the 2014 NAI Ranking, five places lower compared to the previous year, which, according to Marcus & Millichap is due to the heightened pace of construction in the western end of the county. 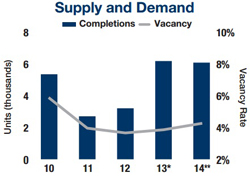 The end of 2013 saw average prices continue the steady improvement that the market has seen since it hit its low point in 2010. By the end of last year, the median price per unit stood above the $130,000 mark. Should the current pace hold through 2014, the year could end on a similar average price to those recorded in 2009.

In terms of completions, approximately 6,000 new rental units will be added in 2014, basically matching 2013’s new stock. The new units will impact the rental stock by just 0.6 percent, while vacancy will go up by around 40 basis points due to completions, more than double the increase recorded in 2013. This will take the average vacancy rate to 4.3 percent for 2014.