Demand for multifamily assets in the Windy City has been significant, with $1 billion worth of properties in the sector trading this year.

Chicago—Demand for multifamily assets in the Windy City has been significant, with $1 billion worth of properties in the sector trading this year.

To be sure, much of the volume has been concentrated in large transactions in the $20 million and up range, reports David N. Gaines, senior associate, National Multi Housing Group in Marcus & Millichap’s Chicago office.

Because of the surge in sales of large properties, the median price per unit was pushed upward to $91,900, from $83,3000 per unit the year before.

“I think there’s still potential for a lot of growth in that $1 million to $20 million market, in the number of transactions being completed from this point forward versus the last 12 months,” Gaines tells MHN.

Large urban Class A assets, which, Gaines points out, “have been a magnet for institutional capital,” are trading at cap rates around 5 percent. Cap rates for suburban Class B properties near major employment hubs or mass transit, meanwhile, are around 7 percent. 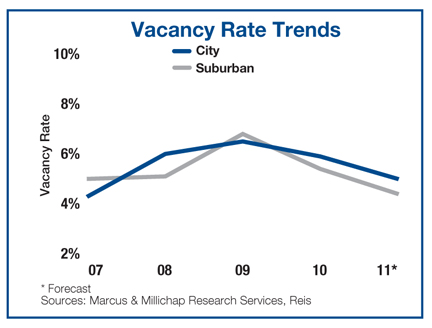 What’s really driven the rent growth downtown, says Gaines, is the lack of new construction. In fact, only about 670 units are slated to come online in 2012 throughout the metro; this is a large decline from the 2,500 units that were completed last year. Additionally, approximately 16,000 units are currently in the planning pipeline over the next four years; while it’s unlikely these will all be built, “it just tells me the development community feels that the demand is there,” points out Gaines.