According to Marcus & Millichap’s projections, apartment vacancy will end the year down 50 bps from the year before. Vacancy did drop 10 bps during the second quarter of the year, but the current rate is 160 bps below the peak in 2009.

Vacancy in Class B and C assets has declined 170 bps, while Class A vacancy dropped only 70 bps.

Effective rent growth, however, will fall short—though the report projects that asking and effective rents will increase 2.2 percent and 2.6 percent, respectively. 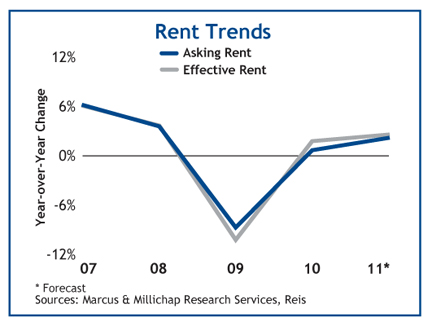 Gross revenue in the last year increased 3.6 percent, though it remains 7.7 percent below the levels achieved at the peak of 2008.

While only 422 units were delivered into the market in the past year, the planning pipeline is comprised of 7,500 units (start dates for the majority of the projects have yet to be announced).

Meanwhile, transaction velocity has increased 25 percent over the last year and is expected to continue on this path, as investors seek opportunities ahead of the anticipated rental rate increases that is already being seen in San Francisco.

Local investors are focused on REO and value-add opportunities, as well as Class B assets in core locations. Larger private investment groups and institutions, meanwhile, are focusing on top-tier assets. According to Marcus & Millichap’s report, the region is experiencing demand from San Francisco and San Jose over the next 12 months, and a growing number of mid-tier property owners will be encouraged to sell.

The median price per unit is $114,400, down 4 percent over the past year, though some highly sought-after properties are trading at $225,000 per unit. And while average cap rates for the metro are between 6 percent and 7 percent, lower quality and REO assets are trading in the 9 percent to 10 percent range.