Strongly supported by a thriving energy sector as well as a robust multifamily industry, Houston’s economy is expected to experience further growth throughout 2014.

Houston—Strongly supported by a thriving energy sector as well as a robust multifamily industry, Houston’s economy is expected to experience further growth throughout 2014. Employment gains are projected to come from a wide array of industries, including manufacturing and professional services as well as corporate expansions, which will yield 111.700 jobs in 2014 and a 3.9 percent jump in payrolls, according to research data from Marcus & Millichap.

Investor interest in the Houston apartment market remains strong, with all property size tranches having recorded an increase in deals during the past year. While the number of properties sold with more than 100 units increased more than 40 percent, transactions involving assets with fewer than 50 apartments doubled from one year earlier. Marcus & Millichap further reports that Class A assets trade at cap rates of less than 6 percent, while Class B/C properties elicit bids at first-year returns starting near 7 percent. 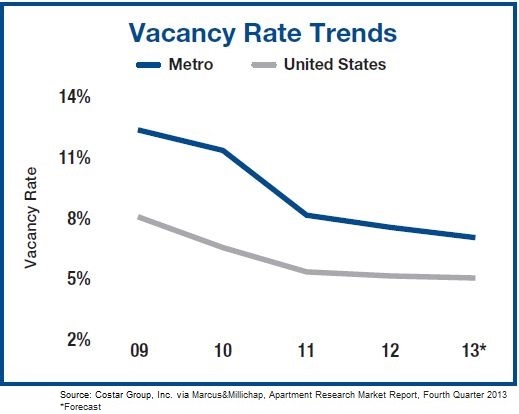 The Houston metro has become an important target market for many out-of-state investors, such as Boston-based Intercontinental Real Estate Corp. which was drawn to the city specifically due to “its impressive commercial resiliency, its vibrancy and diverse economic engine.” The company parted with $61.6 million to acquire the Sawyer Heights Lofts, a 326-unit apartment community in Houston’s Downtown/West Inner Loop. 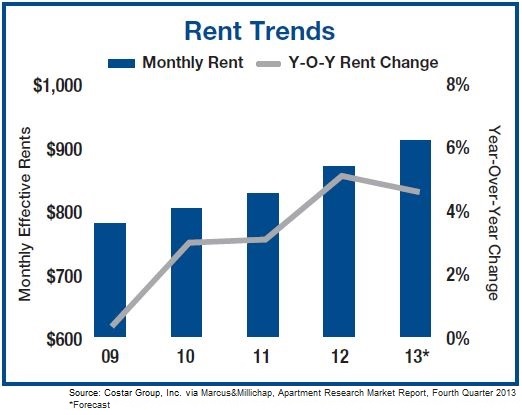 Construction activity is also on the rise as the multifamily market tries to accommodate an influx of new residents, particularly young professionals, to the area. Last year, the local market saw the addition of 9,200 units. Despite the considerable completions, all areas of Greater Houston had positive absorption and vacancy remained unchanged in the third quarter of 2013 at 6.4 percent. In the same period, average rents rose 1.8 percent to $903 per month, or roughly $1.02 per square foot. Properties completed in the third quarter were reportedly spread across nine projects and six submarkets. Approximately 657 rental units have been delivered to the fast-developing Greenway Plaza/Upper Kirby submarkets, driving inventory up 4.8 percent.

Marcus & Millichap’s Market Forecast report indicates that residents will occupy an additional 10,000 units in 2014, bringing the overall vacancy rate down to 7.0 percent. Additionally, the pace of rent growth is expected to rise, with average rental rates climbing 3.6 percent to $941 per month.

More than 10,900 new apartments are projected to come online in 2014. Nearly 1,300 rentals will be placed in service in Galleria/Uptown, including ZOM’s latest development, The Hudson. The 431-unit luxury residential community will be located on a 5.3 acre site on Fountain View Drive at San Felipe Drive near a planned retail center that will be anchored by an upscale HEB Market, as reported by Multi-Housing News Online.

Houston marked an important milestone last year with the re-launch of the Mid-Main project, the city’s first transit-oriented development (TOD). Seven years in the making, the compound will feature 363 apartment homes alongside 30,000 square feet of retail space, in close proximity the METRORail light-rail system.