Albuquerque, N.M.--Despite increasing unemployment, the Albuquerque apartment market has not suffered much.

Albuquerque, N.M.—Despite increasing unemployment, the Albuquerque apartment market has not suffered much.

“We saw unemployment hit 9 percent in January, and back in mid-2008 it was 3.5 percent, so you’d expect to see our apartment market, and the overall housing market, in a really severe slump. In contrast, the multifamily market continues to do quite well,” reports David Eagle, a senior vice president in CBRE Capital Markets’ Multi-Housing Group in Albuquerque.

He credits Kirtland Air Force Base and Sandia National Labs with providing the metro area with a relatively steady workforce.

At the same time, year-over-year average rent improved 3.34 percent. According to the report, market-rate average rent was $719, with affordable rent averaging $681. 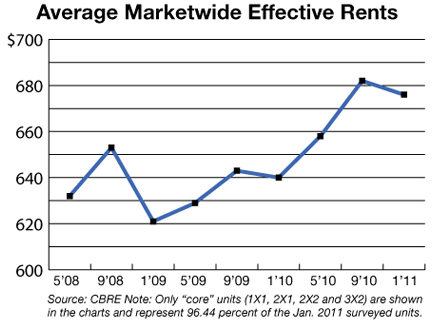 “The reason for the drop-off,” says Eagle, “is we have a good solid market, and if you talk to those selling they are saying we are doing better than other [markets] and [they]’ll hold off selling.”

And while the market hasn’t had a single foreclosure yet, Eagle reports that it is beginning to see some hitting the market now. “If you’re trying to sell and you have existing debt right now with maturities of one to four years, you’re in big trouble because of the inverted yield curve. … If  you look at the rates of one-, two-, three-, four-year Treasury bills, they are very, very low; you can see a $5 million loan with a year-and-a-half to go with a $1 million prepayment, so the low short-term Treasuries have had a profound impact on the cost of prepaying debt early, which has resulted in owners holding on a little bit longer.”

Those that are looking to buy in the market are mostly national private capital firms.

“Cap rates are higher than what you see in most other markets because [Albuquerque] is a relatively low-growth market,” Eagle adds. “We tend to get a higher cap for equal product [in other markets] because we’re viewed as being very safe, but you’re not going to see a 15 percent return in a year.”